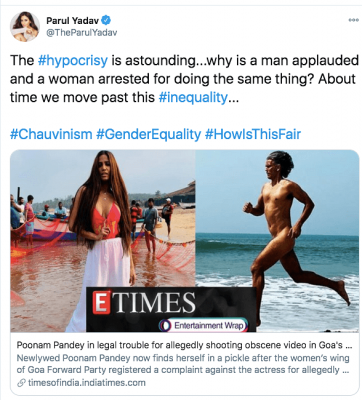 Model and actor Milind Soman was booked by the Goa Police on November 6 for obscenity, days after he posted a photograph of himself running nude on a beach in the state. He is not the first celebrity in trouble with Goa Police for ‘obscenity’ this week — actor Poonam Pandey and her husband faced arrest for a controversial photoshoot, a video of which went viral online.

Two high-profile cases on ‘obscenity’ in the same week come as no surprise, though. India has had a colourful history of prosecuting people for obscene conduct, obscene content and even obscene language.

Section 294 of the Indian Penal Code (IPC) punishes obscene acts or words in a public place. To be considered a crime, the obscenity must cause “annoyance to others”. A person convicted under this law can face up to three months imprisonment. Obscene books are similarly criminalised under Section 292.

The law on obscenity has evolved with the advent of the Internet and social media. Under Section 67 of the Information Technology Act, anyone who publishes or transmits obscene material in electronic form can be punished.

The Oxford dictionary defines obscene as ‘offensive or disgusting by accepted standards of morality and decency’. But for lawyers, the meaning of ‘obscene’ is not as easy to settle on. For a book or object to be obscene, Section 292 of the IPC says it must be lascivious or prurient or have the effect of depriving or corrupting someone. The terms ‘lascivious’, ‘prurient’, ‘deprave’ and ‘corrupt’ have not been clearly defined, leaving room for interpretation by courts. The courts, for their part, have developed tests to determine whether something is ‘obscene’.

In 1965, the landmark Ranjit Udeshi judgment of the Supreme Court adopted the Victorian-era Hicklin test. The test assessed obscenity by the standard of someone who was open to immoral influences and was likely to be corrupted or depraved by the material in question. When approached from this angle, a wide range of material could be ‘obscene’.

Over the years, the judiciary has narrowed the scope of obscenity. In the Aveek Sarkar case of 2014, the Supreme Court did away with the British Hicklin test and adopted the American Roth test, instead. As per this test, obscenity was to be evaluated like an average person would, applying contemporary community standards.

The contemporary community standards test takes into account the changing values in society. What was obscene a century or even a decade ago, need not be obscene now.

The right to freedom of speech and expression is not absolute. Article 19 of the Constitution of India, which guarantees the right also provides for reasonable restrictions on various grounds, including that of decency and morality. This means that free speech has to be balanced against the contemporary community standards of morality when it comes to penalising obscene acts or content.

Indian courts have often settled the debate between morality and freedom in favour of artistic freedom, such as in the M F Hussain judgment of 2008 and the Perumal Murugan judgment of 2016. In the latter, the Supreme Court held that “art is often provocative and is not meant for everyone”— material cannot be labelled as obscene simply because it is unpalatable to one section of society.

The court which granted bail to Poonam Pandey on November 6 seems to have been of a similar view. It observed that content perceived as obscene by some and artistic by others cannot be a ground to jail a person.

Who has been prosecuted for ‘obscenity’ before?

Obscenity laws in India predate Independence. They have been used in colonial India against writers such as Saadat Hasan Manto and Ismat Chughtai whose works traversed themes of sexuality, including female sexuality.

From novels like Lady Chatterley’s Lover and paintings like ‘Bharat Mata’ to biopics like Bandit Queen and comedy shows like All India Bakchod, there have been allegations of obscenity against all kinds of art and popular culture. Hollywood actor Richard Gere faced an arrest warrant after he kissed Shilpa Shetty on her cheeks during an AIDS awareness programme in 2007.

The Kiss of Love campaign, which was launched in 2014 in Kerala to protest moral policing by kissing in public, faced backlash from the same right-wing groups that it was trying to counter. The campaign was dropped after the government threatened action under obscenity laws.

Protima Bedi courted controversy in 1974 when she ran naked on a Mumbai beach for a magazine photoshoot.

Soman himself has faced obscenity charges for nudity before—he and model Madhu Sapre posed naked with a python wrapped around them for an advertisement in 1995. They were acquitted after a 14-year-long trial.