The Electrochemical Eye not only replicates the structure of a natural eye for the first time, but may actually offer sharper vision than a human eye in the future. 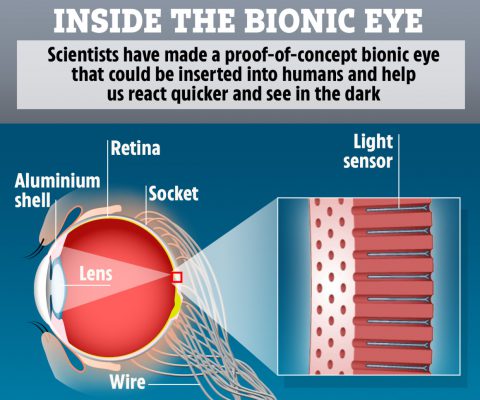 The human eyes encompass incredible natural abilities, including an exceptionally wide field of view, and high resolution married with low distortion capabilities, almost impossible to synthetically recreate in their entirety. These factors taken together can make the loss of vision or the physical removal of an eye a highly distressing and adaptive life-event. In situations where the patient’s eyeball must be surgically removed via a technique known as enucleation, there are very limited options, as is the case for some of those people suffering complete vision loss, with patients usually offered an ocular prosthesis for cosmetic purposes. However, historically vision is not restored through the use of these artificial eyes. Now, a study from researchers led by HKUST develops the world’s first 3D artificial eye surpassing the capabilities of pre-existing bionic eyes and in some cases, exceeding those of the human eyes. The team states their electrochemical eye replicates the structure of its natural counterpart to proffer sharper visual acuity in the future, with extra functions such as the ability to detect infrared radiation in darkness.

Previous studies have indicated ocular prostheses mimicking natural eyes are highly desirable, with a view to restoring sight in humans and gifting vision to humanoid robotics. However, the spherical shape and retina of the biological eye pose a mammoth hurdle for biomimetic devices with engineers attempting to replicate the structure and functionality of a biological eye for over a decade. However, existing prosthetic eyes mostly encompass a pair of spectacles attached with external cables, only able to provide flattened 2D vision with poor resolution. Therefore, a new technology to address these problems is urgently needed. The current study manufactures an electrochemical eye comprising a hemispherical retina constructed from a high-density array of nanowires mimicking the photoreceptors found in the human eye.

The key component of any artificial eye is a sensor that detects light falling on it and turns it into electrical signals. Conventional image sensors used in cameras are flat, but this new device is hemispherical in shape, more like the retina of the eye. This makes the artificial eye, described as a We all know about photovoltaic cells used to generate electricity from sunlight. Researcher Swee Ching Tan and his team at the National University of Singapore (NUS) have now come up with a new device that exploits the contrast between bright spots and shade to create a current that can power small electronics. The greater the contrast between light and dark, the more energy such generators provide. Tan and his team created the device, called a ‘shadow-effect energy generator’ (SEG), which utilises the contrast in Artificial eye ʻbiomimetic electrochemical eyeʼ, more like the natural eye both in look and performance. Its core component is a high-density array of light-sensitive nanowires that serves as the retina. The nanometre-sized photo-sensors were created directly inside the pores of a hemispherical shell of aluminium oxide(Al2O3) by the researchers.

Signals from the nanowire photo- sensors are carried by thin, flexible wires made of a liquid metal (gallium-indium alloy) sealed in thin soft rubber tubes to external circuitry for signal processing. These wires mimic the nerve fibres that connect the human eye to the brain. The artificial retina is held in place by a socket made from a silicone polymer, to ensure proper alignment between the wires and nanowires.

To complete the artificial eye, a lens combined with an artificial iris is placed at the front of the device, as in the human eye. The lens and iris combined with the retina at the back forms a spherical chamber (the ‘eyeball’). The chamber is filled with an ionic liquid that mimics the vitreous humour – the gel that fills the space between the lens and the retina in the human eye.