A chemical gas leakage at LG Polymers Plant in the city of Visakhapatnam in Andhra Pradesh has claimed many lives. The leaked gas is styrene, a colourless liquid that can evaporate easily. The chemical, which is usually refrigerated, has a sweet smell in its pure form. Styrene gas, when inhaled, can cause several symptoms such as nausea, headache, weakness, etc. 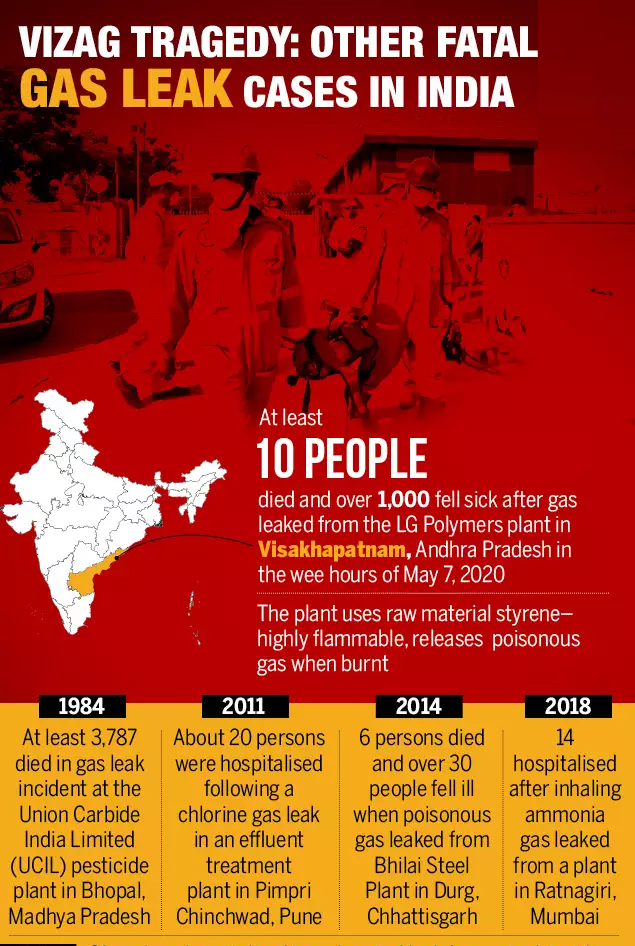 What is styrene gas and how might you be exposed to the chemical?

According to the Agency for Toxic Substances and Disease Registry, styrene is a colourless liquid used extensively in manufacturing plastics and rubber. The chemical is also used in many consumer products, including packaging materials, fiberglass, drinking cups and other food-use items.

Styrene is also found in air, soil and water after release from the use, manufacture and disposal of products containing the chemical compound.

Breathing air containing styrene is the main route of exposure by which the chemical can enter your body. Styrene also occurs naturally in some foods such as fruits, vegetables, beverages, meats, etc, in low levels.

What are its uses?

Styrene is used in production of polystyrene plastics, rubber fiberglass and latex. It is also found in cigarette smoke, vehicle exhaust and natural foods like vegetables and fruits, the report said. One thing to know about styrene is that it is a flammable liquid.

How does styrene affect your health?

Doctors are trying to understand the long-term effects of styrene especially on those who have inhaled the gas during the leak. However, the most common health problems associated with exposure to styrene include:

Hearing loss, sperm damage, have been observed in animals exposed to styrene at high concentration levels. Animal studies have also shown that inhalation of styene can cause damage to the liver and changes in the lining of the nose.

Styrene has been listed as ‘reasonably anticipated to be a human carcinogen’ in the Report on Carcinogens, Twelfth Edition, released on June 10, 2011, by the Department of Health and Human Services (DHHS), National Toxicology Program (NTP).

To detect the presence of styrene in the body, doctors would use your blood, urine and tissues within a few hours of exposure to the chemical.