US Presidential election happens once in every four years on Election Day. Election Day falls on the first Tuesday after the first Monday in November. 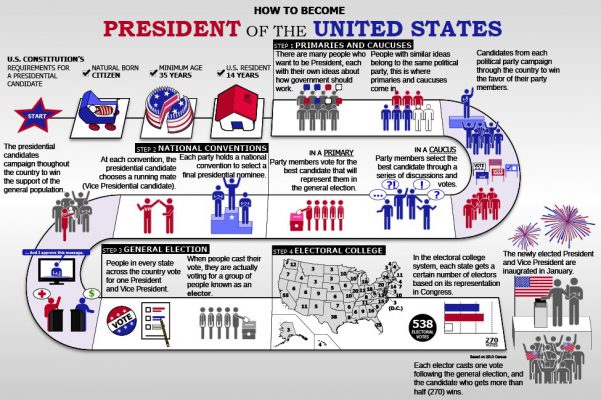 Eligibility conditions for a US Presidential candidate

The Presidential candidate must be:

Steps in the US Presidential elections

Before the general election, a series of primary elections and caucuses are held in each state and territory (including Puerto Rico and Guam) of the US. The main purpose of the primaries and caucuses is to help the states to choose the nominees of the political parties’ for the general election. This process is not specified in the US constitution and got evolved over time. Each state and territory in the US holds primaries or caucuses or both of them.

A caucus is a local private meeting of the local members of a political party to select delegates to the national party convention. In a caucus, members divide themselves into groups according to the candidates they support.  The members select candidate through a series of discussions and finally based on the votes they cast, the number of delegates each candidate has won will be calculated. The Iowa caucus marks the start of the US presidential elections.

Primary elections are state level elections conducted by the state and local governments. In this, voting occurs through a secret ballot and voters choose candidates affiliated with their political party for the upcoming general elections. Winning candidates will send the delegates to the national party convention.

The delegates selected through primaries and caucuses then officially nominate their national candidate.

The General population in the country vote for one president and one vice-president. Here when people vote, they are actually voting for a group of people called as electors.

Each state is allotted a certain number of electors depending upon its total number of representatives in Congress. The electors then cast their votes to decide the next President of the US. Each elector has one electoral vote. If a candidate obtains more than half (270) out of the total 538 electoral votes, he stands elected to the office of the President. In the event no candidate has the majority then the House of Representatives chooses the President and the Senate chooses the Vice President. Both the president-elect and vice president-elect take the oath of office in January.

Although the electoral votes get aligned with the popular vote most of the times, there are some (four) instances in the US history when the elected president did not receive the most popular votes. These 4 presidents were- Rutherford Hayes, Benjamin Harrison, John Quincy Adams, and George W. Bush.

The general election in the United States is too close to call. This has often been the case in the past two decades, ever since the 2000 presidential election was decided when Democratic candidate Al Gore conceded with just 537 votes in between him and George W Bush in Florida.

There is every reason to believe that, with multiple different voting rules in different states, different rates of counting, and legal challenges being prepared by all sides, getting a firm result in this election will take a long while.

What is the cause of inefficient election process in the US?

The election has also shown how deeply divided America has become, and how much identity politics is taking over. In part this is a consequence of increasing inequality, though it is strange that the wealthiest and some of the poorest whites are both Republican. Also, the country is becoming multi-racial. In just four years, the share of white voters has dropped from 71 per cent to 65 per cent. This too is adding to the divisiveness.