Recently, the Permanent Court of Arbitration at the Hague has finally ruled in favour of the telecom giant Vodafone in an investment treaty arbitration (ITA) dispute against India.

The case was initiated under the India-Netherlands Bilateral Investment Treaty (BIT), which pertains to India’s retrospective demand of Rs 22,100 crore as capital gains and withholding tax imposed on a 2007 deal.

The ruling in favour of Vodafone signals a setback for the country’s retrospective taxation policies. It also raises the concern for the ease of doing business and lack of corporate policy framework regarding taxation.

Further, if India really wants to become an international hub of global investment, there is a need for ensuring transparency and certainty in India’s tax regime. 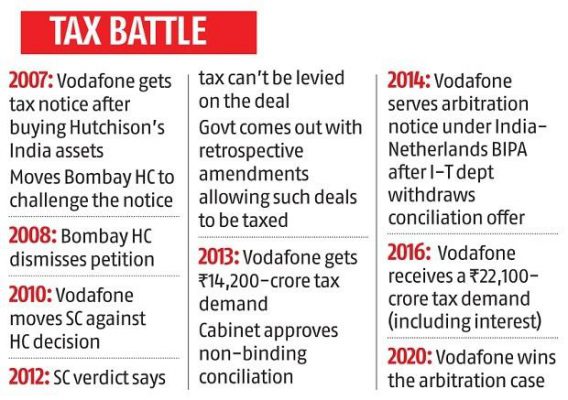 A protracted U.S-China trade war and moving out of manufacturing companies from China (fallout of Covid-19 pandemic) might bolster the investment case for India. In this context, significant tax and investment reforms can have major effects on India becoming an investment hub. Following reforms may help in this regard:

India has taken some positive steps such as reduction in corporate tax rate to 25% from 30% to make them competitive, implementation of Goods and Service tax, Abolition of Foreign Investment Promotion board etc.

While tax reforms were being carried on, the Government in the meantime improved the power and Infrastructure situation. Tax being one of the most important factors in making any country to become more competitive, globally.

Further, with the most open economy along with significant tax reforms, Indian Government will put India ahead of all countries to attract business and thereby creating growth opportunities for global businesses and growth of the country.