Once again, relations between India and Nepal have taken a turn for the worse. The immediate provocation is the long-standing territorial issue surrounding Kalapani, a patch of land near the India-Nepal border, close to the Lipulekh Pass on the India-China border, which is one of the approved points for border trade and the route for the Kailash-Mansarovar yatra in Tibet. However, the underlying reasons are far more complex. Yet, Nepali Prime Minister K.P. Sharma Oli’s exploitation of the matter, by raising the banner of Nepali nationalism and painting India as a hegemon, is part of a frequent pattern that indicates that relations between the two countries need a fundamental reset.

Kalapani and the maps

India inherited the boundary with Nepal, established between Nepal and the East India Company in the Treaty of Sugauli in 1816.Kali river constituted the boundary, and the territory to its east was Nepal. The dispute relates to the origin of Kali. Near Garbyang village in Dharchula Tehsil of the Pithoragarh district of Uttarakhand, there is a confluence of different streams coming from north-east from Kalapani and north-west from Limpiyadhura. The early British survey maps identified the north-west stream, Kuti Yangti, from Limpiyadhura as the origin, but after 1857 changed the alignment to Lipu Gad, and in 1879 to Pankha Gad, the north-east streams, thus defining the origin as just below Kalapani. Nepal accepted the change and India inherited this boundary in 1947.

The Maoist revolution in China in 1949, followed by the takeover of Tibet, created deep misgivings in Nepal, and India was ‘invited’ to set up 18 border posts along the Nepal-Tibet border. The westernmost post was at Tinkar Pass, about 6 km further east of Lipulekh. In 1953, India and China identified Lipulekh Pass for both pilgrims and border trade. After the 1962 war, pilgrimage through Lipulekh resumed in 1981, and border trade, in 1991.

In 1961, King Mahendra visited Beijing to sign the China-Nepal Boundary Treaty that defines the zero point in the west, just north of Tinkar Pass. By 1969, India had withdrawn its border posts from Nepali territory. The base camp for Lipulekh remained at Kalapani, less than 10 km west of Lipulekh. In their respective maps, both countries showed Kalapani as the origin of Kali river and as part of their territory. After 1979, the Indo-Tibetan Border Police manned the Lipulekh Pass. In actual practice, life for the locals (Byansis) remained unchanged given the open border and free movement of people and goods.

After the 1996 Treaty of Mahakali (Kali river is also called Mahakali/Sarada further downstream) that envisaged the Pancheshwar multipurpose hydel project, the issue of the origin of Kali river was first raised in 1997. The matter was referred to the Joint Technical Level Boundary Committee that had been set up in 1981 to re-identify and replace the old and damaged boundary pillars along the India-Nepal border. The Committee clarified 98% of the boundary, leaving behind the unresolved issues of Kalapani and Susta (in the Terai) when it was dissolved in 2008. It was subsequently agreed that the matter would be discussed at the Foreign Secretary level. Meanwhile, the project to convert the 80-km track from Ghatibagar to Lipulekh into a hardtop road began in 2009 without any objections from Nepal.

The Survey of India issued a new political map (eighth edition) on November 2, 2019, to reflect the change in the status of Jammu and Kashmir as two Union Territories. Nepal registered a protest though the map in no way had changed the boundary between India and Nepal. However, on November 8, the ninth edition was issued. The delineation remained identical but the name Kali river had been deleted. Predictably, this led to stronger protests, with Nepal invoking Foreign Secretary-level talks to resolve issues. With the Indian Ambassador Manjeev Puri in Kathmandu retiring in end-December and Foreign Secretary Vijay Gokhale retiring a month later, the matter remained pending despite reminders from Kathmandu. 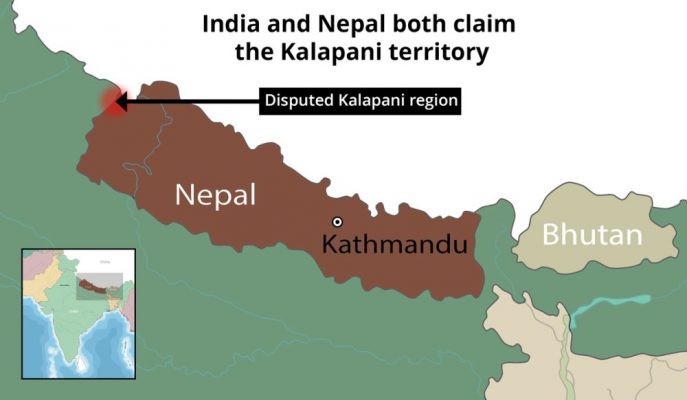 By April 2020, Mr. Oli’s domestic political situation was weakening. Under the Nepali Constitution, a new Prime Minister enjoys a guaranteed two-year period during which a no-confidence motion is not permitted. This ended in February unleashing simmering resentment against Mr. Oli’s governance style and performance. His inept handling of the COVID-19 pandemic added to the growing disenchantment. Within the Nepal Communist Party (NCP) there was a move to impose a ‘one man, one post’ rule that would force Mr. Oli to choose between being NCP co-chair or Prime Minister.

The re-eruption of the Kalapani controversy, when Defence Minister Rajnath Singh did a virtual inauguration of the 80-km road on May 8, provided Mr. Oli with a political lifeline. A subsequent comment by the Chief of the Army Staff (COAS), General Manoj Naravane, on May 15 that “Nepal may have raised the issue at the behest of someone else” was insensitive, given that the Indian COAS is also an honorary general of the Nepal Army and vice-versa, highlighting the traditional ties between the two armies.

Mr. Oli had won the election in 2017 by flaunting his Nepali nationalism card, the flip side of which is anti-Indianism. This is not a new phenomenon but has become more pronounced in recent years. Mr. Oli donned the nationalist mantle vowing to restore Nepali territory and marked a new low in anti-Indian rhetoric by talking about “the Indian virus being more lethal than the Chinese or the Italian virus”.

A new map of Nepal based on the older British survey reflecting Kali river originating from Limpiyadhura in the north-west of Garbyang was adopted by parliament and notified on May 20. On May 22, a constitutional amendment proposal was tabled to include it in a relevant Schedule. The new alignment adds 335 sq km to Nepali territory, territory that has never been reflected in a Nepali map for nearly 170 years.

This brief account illustrates the complexity underlying India-Nepal issues that cannot be solved by rhetoric or unilateral map-making exercises. Such brinkmanship only breeds mistrust and erodes the goodwill at the people-to-people level. Political maturity is needed to find creative solutions that can be mutually acceptable.

Prime Minister Narendra Modi has often spoken of the “neighbourhood first” policy. He started with a highly successful visit to Nepal in August 2014. But the relationship took a nosedive in 2015 when India first got blamed for interfering in the Constitution-drafting in Nepal and then for an “unofficial blockade” that generated widespread resentment against the country. It reinforced the notion that Nepali nationalism and anti-Indianism were two sides of the same coin that Mr. Oli exploited successfully.

In Nepali thinking, the China card has provided them the leverage to practise their version of non-alignment. In the past, China maintained a link with the Palace and its concerns were primarily related to keeping tabs on the Tibetan refugee community. With the abolition of the monarchy, China has shifted attention to the political parties as also to institutions like the Army and Armed Police Force. Also, today’s China is pursuing a more assertive foreign policy and considers Nepal an important element in its growing South Asian footprint.

The reality is that India has ignored the changing political narrative in Nepal for far too long. India remained content that its interests were safeguarded by quiet diplomacy even when Nepali leaders publicly adopted anti-Indian postures — an approach adopted decades earlier during the monarchy and then followed by the political parties as a means of demonstrating nationalist credentials. Long ignored by India, it has spawned distortions in Nepali history textbooks and led to long-term negative consequences. For too long India has invoked a “special relationship”, based on shared culture, language and religion, to anchor its ties with Nepal. Today, this term carries a negative connotation — that of a paternalistic India that is often insensitive and, worse still, a bully.

It is hardly surprising that the 1950 Treaty of Peace and Friendship which was sought by the Nepali authorities in 1949 to continue the special links it had with British India and provides for an open border and right to work for Nepali nationals is viewed as a sign of an unequal relationship, and an Indian imposition. Yet, Nepali authorities have studiously avoided taking it up bilaterally even though Nepali leaders thunder against it in their domestic rhetoric.

The urgent need today is to pause the rhetoric on territorial nationalism and lay the groundwork for a quiet dialogue where both sides need to display sensitivity as they explore the terms of a reset of the “special relationship”. A normal relationship where India can be a generous partner will be a better foundation for “neighbourhood first” in the 21st century.