One was launched in 1948, much before the Indian Parliament was born, or for that matter, even the Indian Constitution came into force while other in 2020 when the coronavirus pandemic and a government-enforced lockdown generated an exodus similar to the one caused by India’s partition in 1947. In many ways, the PM National Relief Fund (PMNRF) launched in 1948 by then PM Jawaharlal Nehru and the PM Citizens Assistance and Relief in Emergency Situations (or PM CARES) fund launched by Modi in 2020 could be largely the same means to achieve common ends – mitigating the consequences of untold disasters and consequent human flights to escape misery and destitution.

The similarities end there. In many ways, Modi’s PM CARES could be a more democratic and constitutional way of building a war chest for crisis situations like the present Coronavirus pandemic and for other exigencies in the future than the PMNRF was till date.

PMNRF was being governed by a managing committee that also consisted of a representative from India’s private business sector, as originally envisaged by Nehru till 1985. Since 1985, when Rajiv Gandhi was the PM, the management of the fund was entrusted entirely with the prime minister. Since then, the PM has had the sole discretion of appointing a secretary to manage the fund. No separate office or staff is allocated for managing PMNRF. Managing the fund is an honorary function and no separate remuneration is paid for it.

Under PMNRF, the criterion for disbursement of money and selection of beneficiaries is purely at the ‘discretion of the PM and in accordance with the PM’s directions.’ 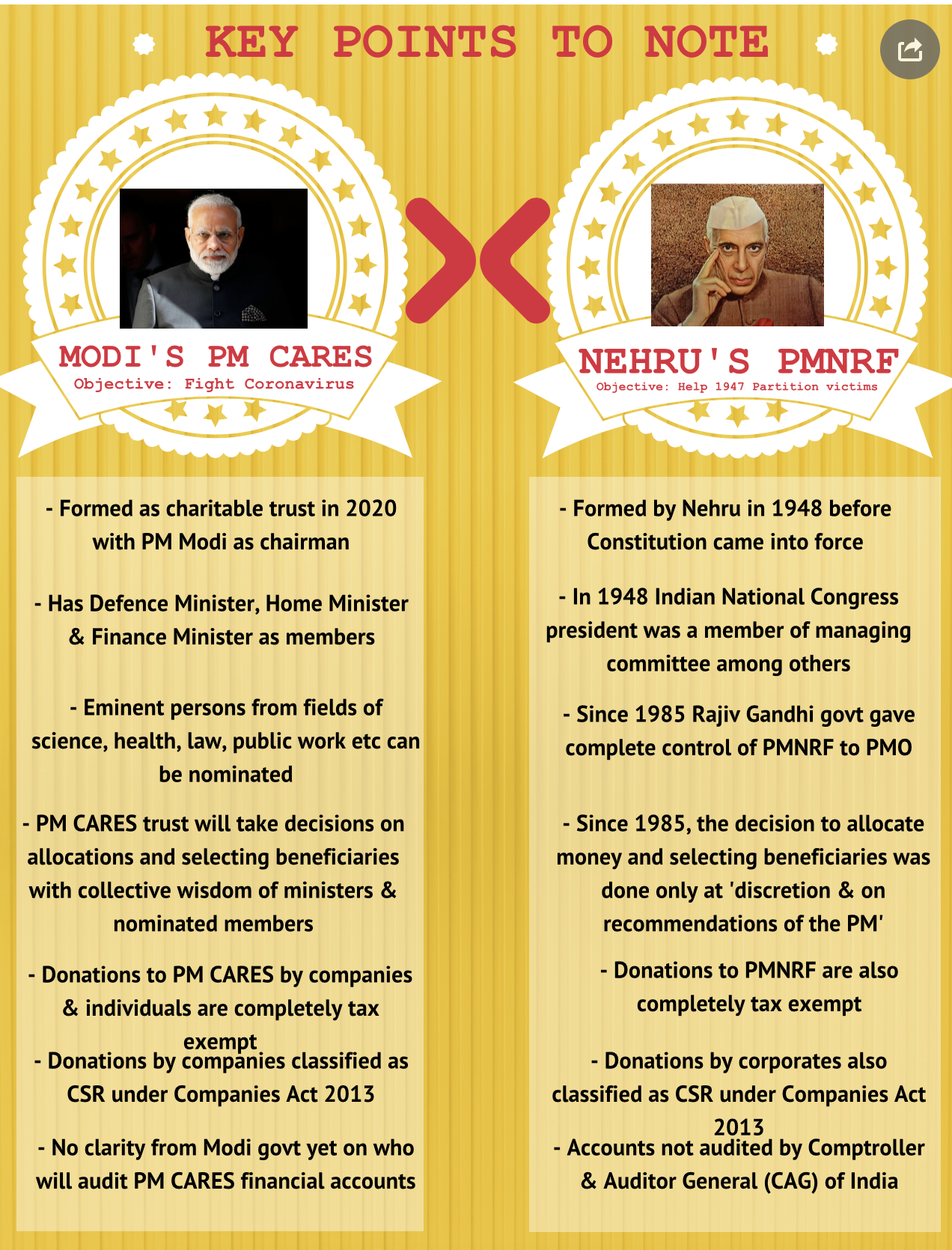 Modi’s PM CARES now delegates that power of deliberation and decision making to three other ministers of the government, who handle some of the most crucial portfolios. Apart from the Modi who will chair the trust, it also has his top three ministers – Home Minister Amit Shah, Defence Minister Rajnath Singh and Finance Minister Nirmala Sitharaman as members. As chairman of the PM CARES trust, Modi still has the responsibility of sanctioning and approving his ministers’ recommendations; but unlike PMNRF, he is not the proverbial ‘judge, jury and executioner.’ By the looks of it, Modi seems to have diluted the powers of his own office over the crucial fund with the creation of PM CARES. While the modalities and operational framework of PM CARES are yet unknown, PMNRF over the years has not been allowed to be audited by Comptroller and Auditor General (CAG) of India. The vetting of PMNRF’s account has been done by third party auditors till date.

The move to replace a Nehruvian remnant of pre-Constitutional days in the current crisis hasn’t gone down well with many. Historian Ramachandra Guha has taken to social media questioning the need for creating PM CARES when the existing PMNRF could have been used to collect the money. In a scathing critique of the move Guha said on social media that PM CARES was a “self-aggrandising name” and that a “colossal national tragedy was being (mis)used to enhance the cult of personality.”

Opposition leaders too have been quick to condemn the move. Congress MP Shashi Tharoor used social media to express his disapproval. Tharoor said, “Why not simply rename PMNRF as PM-CARES, given the PM’s penchant for catchy acronyms, instead of creating a separate public charitable trust whose rules and expenditure are totally opaque? PM Modi owes the country an explanation for this highly unusual step.”

The Modi administration is unperturbed by the criticism. “It will be administered like the PMNRF and micro donations are also accepted. The focus is to channelise all resources to fighting the pandemic and meeting the challenges on various fronts. It is a call for collective action and our experience shows that whenever such a situation has arisen all sections of society have donated generously,” said a joint secretary with the Prime Minister’s Office (PMO).

“It is a great step that assures people that the money that they contribute will be used solely for fighting Coronavirus. At this point, PM CARES is a critical move not just for victims of the pandemic but also for those people whose lives have been adversely affected by the lockdown. Nobody has stopped people from donating to PMNRF. But that money is used for other purposes as well. Here people can be assured that the money will be used for fighting Coronavirus,” said Rakesh Sinha, Member of Parliament (MP) of the Bharatiya Janata Party (BJP).

In 1948, Nehru had launched the PM National Relief Fund (PMNRF) which could be used for any type of emergency, but at that point of time had to be used for “relief and rehabilitation of refugees who came to India from Pakistan.” A representative of the Tata Trusts was part of the six-member board that included then Congress president Pattabhi Sitaraimayaa, deputy PM Sardar Vallabhai Patel, then finance minister Shanmukam Chetty among others.

PMNRF’s evolution over the past decade-and-a-half has been a tale of many hits and misses. Its present corpus of Rs 3,800 crore is grossly insufficient to meet the massive financial implications of tackling an emergency situation like the Coronavirus pandemic which has spread its tentacles with vicious speed across India. The fund that was primarily meant to tackle emergency situations has now become an investment vehicle instead of fulfilling its primary objective of keeping a war chest ready for situations like the one currently being faced by India.

In 2018-19, it received voluntary contributions from companies and individuals amounting to Rs 534 crore – two thirds of its total receipts. For the first time ever since records are available, the PMNRF made an investment of Rs 1,301 crore in state development loans (SDLs).

This was done by liquidating its fixed deposits to the tune of Rs 1,750 crore and redeeming tier–II bonds. While a part of this money was invested in SDLs, an amount of Rs 250 crore was invested in fixed deposits with IDFC Bank. In fact, investment in tier-I and tier-II bonds from PMNRF funds were also introduced sometime in 2016-17. In the past, the fund had pretty much been putting money in good old savings accounts, investing in fixed deposits and earning interest worth crores from them.

After a record-breaking collection of Rs 926 crore in 2004-05, donations dwindled to a trickle in subsequent years. The 2004-05 windfall was on account of donations that poured in for the devastating 2004 Indian Ocean tsunami that killed over 10,000 people in India. In subsequent years, interest income often exceeded donations. From 2009-10 to 2012-13, the first four years of Manmohan Singh’s second stint as PM, contributions received by PMNRF was a measly Rs 106 crore. During the same period, the income earned from interest from bank deposits was Rs 620 crore.

Regardless of its inadequacy to meet the Coronavirus pandemic, PMNRF’s role in mitigating the impact of disasters and rebuilding human lives in the past has been invaluable. It receives thousands of requests every year for medical help from citizens. While not everyone is obliged with help, PMNRF has over the years consistently funded the medical treatment of those in need. Since 2008-09, Rs 950 crore have been given to individuals and families for medical treatment. In addition, the fund has chipped in to help people affected by ethnic violence and communal clashes. While the PMO hasn’t made details of the ethnic clashes or riots where it has stepped in to help victims, one of its most significant contributions in any financial year was in 2012-13 when an amount of Rs 35 crore was paid out on this account.

The year 2012 had seen one of the deadliest cases of ethnic violence in recent times in Assam, when clashes between ethnic Bodos and Bengali-speaking Muslims led to the death of 77 people and uprooted lakhs of people from their villages. Ex-gratia payments and rehabilitation help continued for tsunami victims from PMNRF’s kitty before being eventually discontinued in 2013. But the fund has contributed to other significant natural disasters over the years. 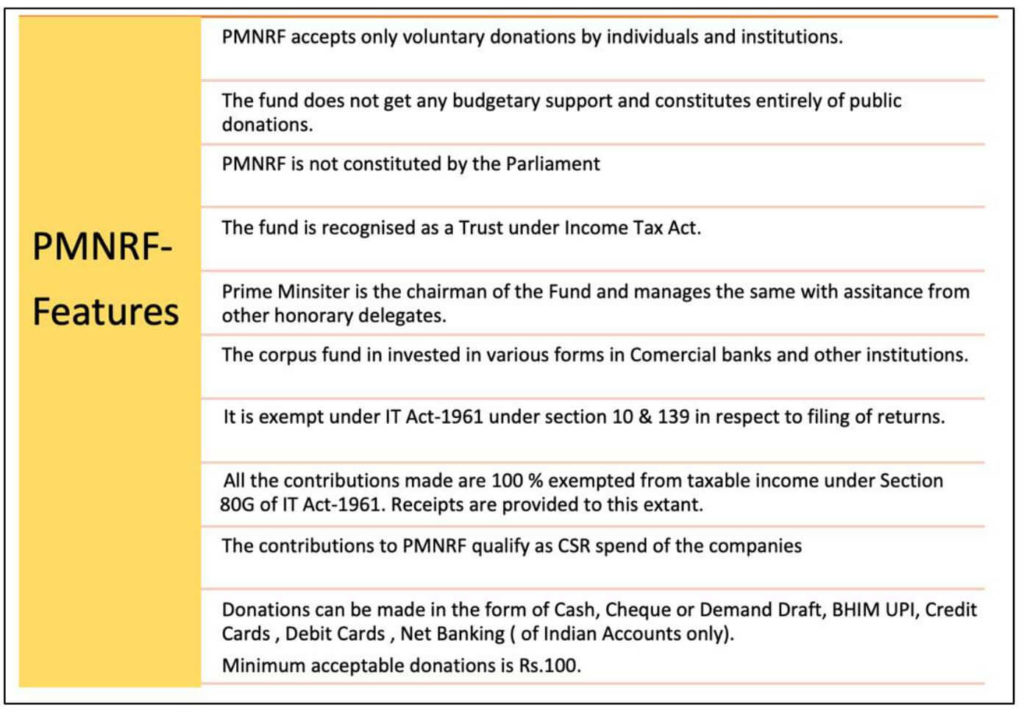 These include crores of rupees for rehabilitating victims of the Cyclone Aila in 2009 in Odisha and West Bengal. In addition, an amount of Rs 60 crore was also disbursed in 2012. This was the year when deadly floods ravaged the Himalayan state of Uttarakhand. In 2014, when Kashmir was devastated by floods, Rs 258 crore was sanctioned from PMNRF. Compensation has also been paid to victims of various mishaps. From bus accidents in Nepal, victims of stampedes in Kumbh, riot victims in Muzaffarnagar, burn victims in Sivakasi cracker factory explosions to families of security personnel massacred by Naxals in Chhattisgarh; PMNRF has been there in times of need with whatever it could conjure at the time.

So can Modi’s PM CARES turn a new chapter in preparing a stronger coffer for India to tackle black swan events like the Coronavirus pandemic or will it go the PMNRF way? Commitments for contributions look like they could well exceed PMNRF’s existing corpus. The Tata group has committed Rs 1,500 crore. Other corporates like Vedanta, Adani, Reliance Industries Limited among others have pledged crores in donations to the fund. So have bankers, sports bodies, sportspersons, Bollywood actors and other wealthy Indians. With a more democratic and constitutionally sound trust in place, expectations would be that PM CARES becomes a war chest that India can readily rely on in emergencies when the future of an entire country is at stake.