Mahatma Gandhi advocated for ‘Gram Swaraj’ and argued for the handing over certain powers to the villagers to display the spirit of participatory democracy.

The National Panchayati Raj Day is celebrated every year on April 24. The Panchayati Raj Institutions play a major role in the socio and economic development of people at the grassroot level.

Panchayati Raj Institutions (PRI) as units of local government have been in existence in India for a long time, in one form or another. However, it was only in 1992, on the recommendations of the LM Singhvi Committee (1986), that it was granted constitutional status as the third level of India’s federal democracy through the 73rd Amendment Act.

The primary objective of establishing the third tier of the government (PRI) is to increase democratic participation, to better articulate local needs and priorities, and to ensure a more efficient use of local resources along with greater accountability and transparency.

However, this tier of the government is marred by many problems that need to be sorted out. 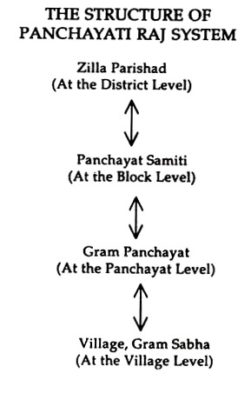 Bottlenecks in the PRI System

What needs to be done?.

The recommendations of the 6th report of the 2nd Administrative Reform Commission (ARC) can be implemented for a better and effective functioning of the Panchayati Raj institutions.

GPs are increasingly going beyond their traditional civic functions and taking up more and more developmental responsibilities. Their increased role and stature is a clear reminder of grass root democracy in India. The success of democracy at the top requires that it is built from the bottom.

The governments should make adequate efforts to devolve funds, functions, and functionaries to panchayats, so that they can effectively plan economic development and social justice schemes. An empowered PRI is the foundation to an ideal ‘Gram Swaraj’ as advocated by Mahatma Gandhi.

e-GramSwaraj- A Simplified Work Based Accounting Application for Panchayati Raj.