1st August is a day which made Muslim women free from the social evil of ‘Triple Talaq’. It is recorded in the country’s history as “Muslim Women Rights Day”.

Also known as ‘Talaq-e-biddat’, if a man belonging to the religion of Islam pronounces talaq thrice either orally or in written form to his wife, then the divorce is considered immediate and irrevocable.The only way to reconcile the marriage is through the practice of nikah halala, which requires the woman to get remarried, consummate the second marriage, get divorced, observe the three-month iddat period and return to her husband.

The Triple Talaq was held to be violative of Article 14 (the right to equality), which is held by the Supreme Court from Shah Bano case 1986 to Shayara Bano case in 2017. Triple Talaq is already banned in more than 20 Islamic countries including Pakistan.

Shakuntala Devi (1929-2013) was a mathematician who was not formally educated, and was far from exceptional in cognitive tests, and yet she could perform calculations with large numbers in a few seconds, sometimes instantly.

By all accounts, Shakuntala Devi was entirely self-taught. Daughter of a circus performer, she travelled with her parents since she was three years old, and is said to have cultivated her calculating abilities while performing card tricks. Once she began to extract cube roots rapidly in her head, she became a performer exhibiting her skills. By the time she was a teenager, she was already travelling around the world, usually before audiences in colleges and universities.

The Supreme Court has brought ‘smog towers’ back in the news. What are they?

Recently, a Supreme Court bench had sharp words for authorities in Haryana, Punjab and Uttar Pradesh for failing to control the practice of stubble-burning on farms, which contributes to air pollution in Delhi at the beginning of every winter.

The Bench directed authorities to take measures, including asking the Delhi government and the Central Pollution Control Board (CPCB) to submit a comprehensive plan on setting up “smog towers” in the capital.

A Bill authored by American civil rights leader and lawmaker John Lewis, which seeks to establish an exchange programme between India and the U.S. to study the work and legacies of Mahatma Gandhi and civil rights leader Martin Luther King Jr., passed an important committee in the U.S. House of Representatives.

A long-pending case of idol theft finally saw an important development as Natesa, a rare sandstone idol in the 9th century Prathihara style of Rajasthan, is returning to the country after 22 years. The Natesa icon, currently at the Indian High Commission, London, was originally from the Ghateswara Temple, Baroli, Rajasthan.

The sandstone Natesa figure stands tall at almost 4 ft. in a rare and brilliant depiction of Lord Shiva in the late 9th century Prathihara style of Rajasthan. A beautiful depiction of Nandi is shown behind the right leg of the Natesa icon. 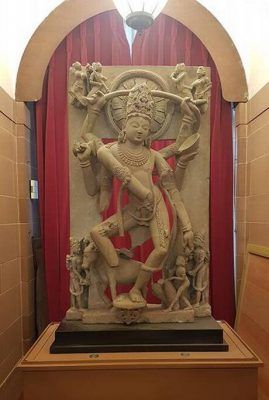