Born half a century ago in the middle of a world riven by antagonism between the USA and the USSR and the alliances they led, Nam had been the vehicle for developing world to assert their independence from the competing claims of the two superpowers.

Recently, the Prime Minister of India hosted a video conference that addresses a summit of the Non-aligned nations. This is in concurrence of India’s efforts of promoting global cooperation in combating the Covid-19 pandemic.

In the domain of foreign policy, this meeting assumes great significance, given the fact that Indian Prime Minister has skipped the last two NAM summits, at Venezuela in 2016 and Azerbaijan in 2019.

It is argued that the Non-Alignment Movement (NAM) was the product of certain circumstances which have undergone a sea change and thus, have become irrelevant.

However, the Covid-19 pandemic and India renewed interest in NAM, have earmarked the relevance of Non-Alignment Movement (NAM) to pursue effective work programmes at the international level. 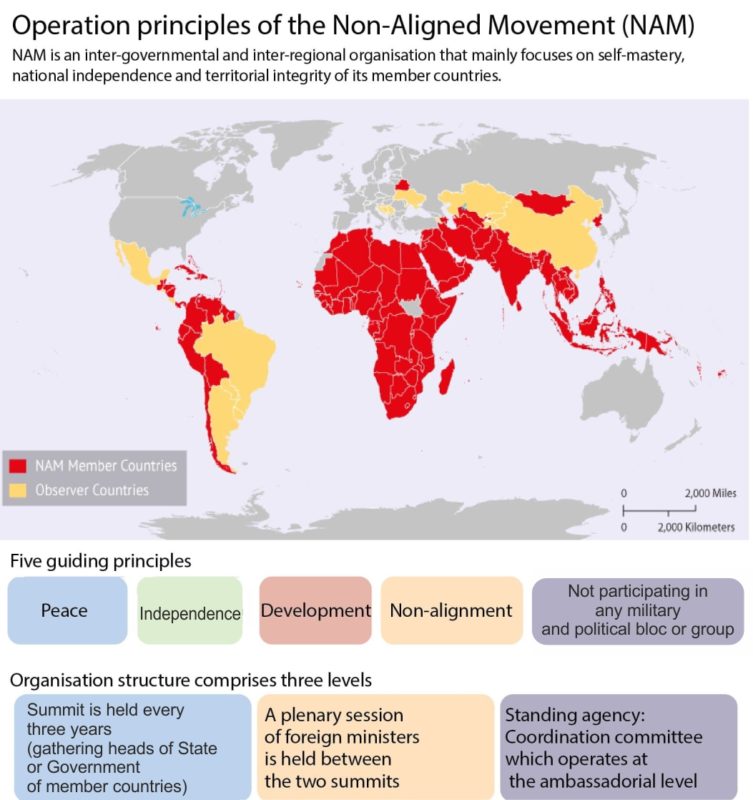 NAM is criticized because

The Non-Aligned Movement was formed during the Cold War as an organization of States that did not seek to formally align themselves with either the superpowers: the United States or the Soviet Union but sought to remain independent or neutral. It also stands united for the decolonization of European colonies in Asia and Africa.

The somewhat old-fashioned sound of the term revives charges that the movement is out of date.

However, the world order has changed significantly in 21st-century, which has rendered the utility of the NAM doubtful:

The 21st-century world order is significantly different from that of the 20th-century. Though the world has changed, the problems have remained almost the same. In this context, NAM can prove its worth by striving to work for the following contemporary issues:

Restructuring and democratization of the UN

Importance of NAM for India

Support for India’s Candidature in UNSC

NAM has been shaping a persona that is increasingly vocal about resisting the hegemony of the sole superpower, the US, and in asserting the independence of its members – overwhelmingly former colonies in the developing world – from the dominance of “Western imperialism”.

NAM embody the desire of many developing countries to stake out their own positions distinct from the Western-led consensus on a host of global issues – energy, climate change, technology transfer, the protection of intellectual property specially in pharmaceuticals, and trade, to name a few. In its determination to articulate a different standpoint on such issues, NAM embodies many developing countries’ desire to uphold their own strategic autonomy in world affairs and the post-colonial desire to assert their independence from the West.

For a country like India, whose two and half decades of economic growth have made it an important player on the global stage, the non-aligned movement remains a necessary reflection of its anti-colonial heritage.

However NAM is no longer the only, or even the principal, forum for its international ambitions. In the second decade of the 21st century, India is moving increasingly beyond non-alignment to what is known as “multi-alignment” – maintaining a series of relationships, in different configurations, some overlapping, some not, with a variety of countries for different purposes.

Thus India is simultaneously a member of the Non-Aligned Movement and of the Community of Democracies, where it serves alongside the same imperial powers that NAM decries. It has a key role in both the G-77 (the “trade union” of developing countries) and the G-20 (the “management” of the globe’s macro-economic issues).

An acronym-laden illustration of what multi-alignment means lies in India’s membership of IBSA (the South-South cooperation mechanism that unites it with Brazil and South Africa), of RIC (the trilateral forum with Russia and China), of BRICS (which brings all four of these partners together) and of Basic (the environmental-negotiation group which adds China to IBSA but not Russia). India belongs to all of these groupings; all serve its interests in different ways. That is the manner in which India pursues its place in the world, and the non-aligned movement is largely incidental to it.

Has the Non-Alignment Movement (NAM) lost its relevance in a multipolar world?