With a locust outbreak ravaging parts of western India, a Union Environment Ministry official said that it was a very badly-timed “serious infestation” that has occurred when the country is already in the middle of a pandemic.

Even as India struggles to contain the COVID-19 pandemic and deal with the impact of Cyclone Amphan, another calamity is already knocking at its doors. North Indian states are facing a locust attack which threatens to damage standing crops and create a food shortage crisis.

Standing crops and vegetables in Rajasthan, Punajb, Haryana and Madhya Pradesh face a major threat as swarms of locust have been reported a month in advance. There is an alert for Uttar Pradesh, Maharashtra and Delhi as well. State governments are scampering to control the swarms by providing farmers with pesticide sprays which can be mounted on tractors. The Rajasthan government is reportedly working on using drones and planes to spray pesticides.

This is the second such attack in six months with Rajasthan already facing a similar outbreak towards the end of 2019. According to a report in Down To Earth, 60% of Rajasthan’s cumin crop worth Rs 300 crore was destroyed in the attack. Locusts are migratory pests which resemble grasshoppers but differ from them in their ability to form swarms and migrate great distances. There are 10 major species of locusts in the word with Desert locust (Schistocerca gregaria), Migratory locust (Locusta migratoria) Bombay Locust (Nomadacris succincta) and Tree locust (Anacridium sp.) being found in India.

India has not witnessed full-blown locust cycles since 1993. Heavy rains and an increasing number of cyclones, both are a result of the climate crisis, enabled unprecedented breeding and the rapid growth of locust populations on the Arabian Peninsula, last year.

The high magnitude of insects attack and their early arrival highlights a critical aspect of global warming i.e. it may link disparate disasters — floods, pandemics and pestilence — amplifying the potency of each.

Locust is an insect that belongs to species of grasshoppers. The desert locust is one of the species of short-horned grasshoppers in the family Acrididae that have a swarming phase. These insects are usually solitary, but under certain circumstances they become more abundant and change their behaviour and habits. As their population become dense, they form swarms and start damaging the crops.

A desert locust lives a total of about three to five months. This is variable and depends mostly on weather and ecological conditions. The life cycle of a desert locust comprises of three stages – egg, hopper, and adult. Eggs hatch in about two weeks (the range is 10-65 days), hoppers develop in five to six stages over a period of about 30-40 days, and adults mature in about three weeks to nine months but more frequently from two to four months.

A female desert locust lays eggs in an egg pod primarily in sandy soils at a depth of 10-15 centimeters below the surface. A solitary female lays about 95-158 eggs whereas a gregarious female lays usually lays less than 80 eggs in an egg pod. Females can lay at least three times in their lifetime usually at intervals of about 6-11 days. Up to 1,000 egg pods have been found in one square meter.

Desert locusts usually fly with the wind at a speed of about 16-19 km/h depending on the wind. Locust swarms can travel about 5-130 kilometers or more in a day. They can stay in their air for long periods of time. Example: (a) Locusts regularly cross the Red Sea, a distance of 300 kilometers. (b) Travelled from North-West Africa to the British Isles in 1954 (c) Travelled from West Africa to the Caribbean, a distance of 5000 km in about 10 days in 1988

A solitary desert locust usually flies at night whereas gregarious adults (swarms) fly during the day.

A Desert Locust adult can consume roughly its own weight in fresh food per day, that is about two grams every day. A 1 km2 size swarm contains about 40 million locusts, which eat the same amount of food in one day as about 35,000 people. This is based on a person eating an average of 2.3 kg of food per day, according to the USDA.

Locusts do not attack people or animals. There is no evidence that suggests that locusts carry diseases that could harm humans.

People in several countries collect locusts using large nets and by other means. Locusts are usually stir-fried, roasted or boiled and eaten immediately or dried and eaten later (see some recipes below). Locusts are rich in protein. During periods of increased locust activity, piles of dead locusts can be found in the market places of many locust affected countries. 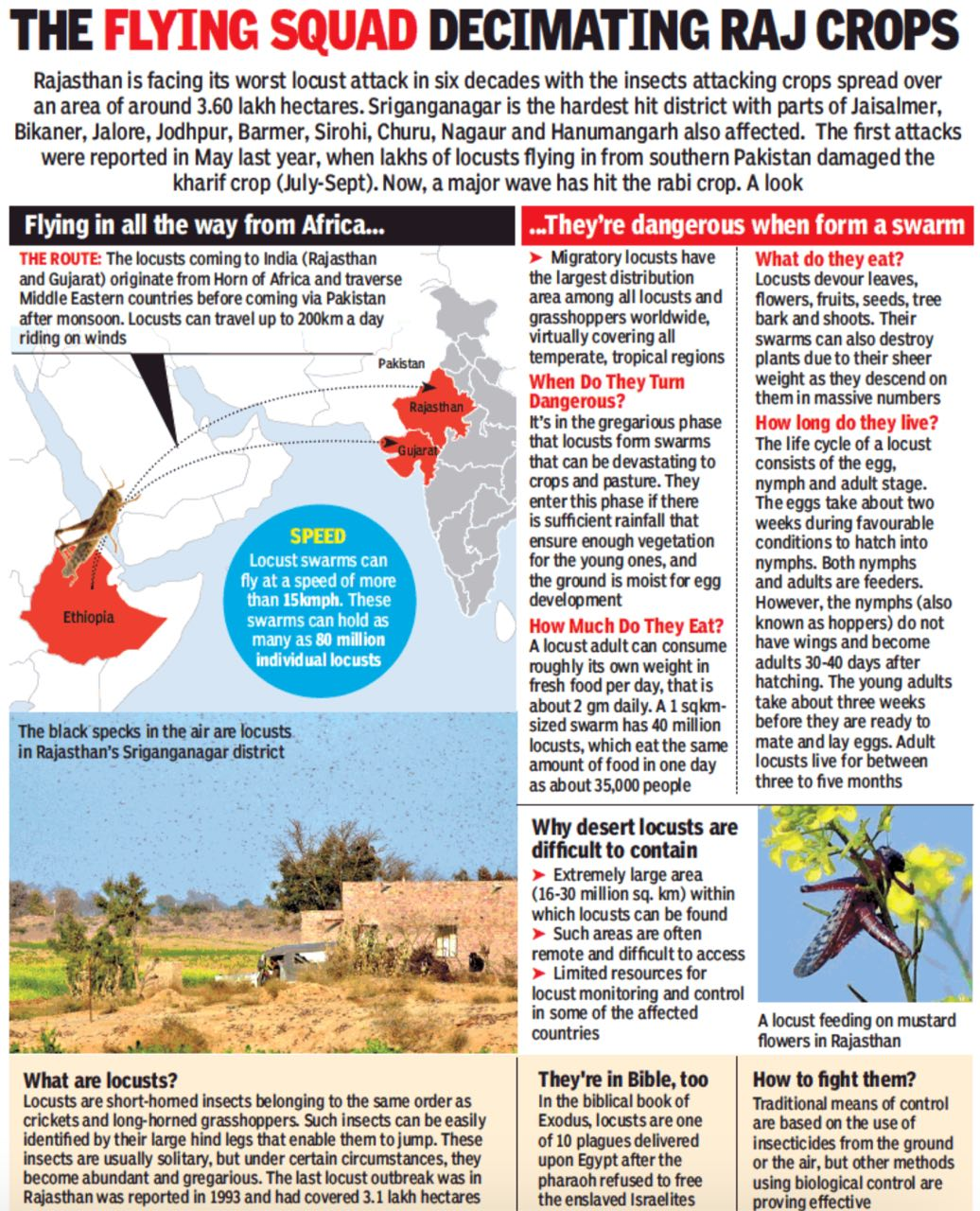 What caused the current Locust Attack?

Climate Change and Swarm of Locust

What is the impact of Locust Attack?

There are generally three ways of controlling locusts — conventional pesticides, biopesticides and insect growth regulators. These pesticides are mainly sprayed through vehicle-mounted and aerial sprayers. In India, the Locust Warning Organisation under the Ministry of Agriculture, Co-operation & Farmers Welfare looks after controlling locust populations. Desert locusts typically follow a summer breeding cycle from July to October in India. However, the current locust swarms are originating from spring breeding areas in Iran, Balochistan and the Indus valley in Pakistan, according to a Ministry of Agriculture & Farmers’ Welfare bulletin.