Although section 309 in the IPC has provided punishment for the person who attempts to commit suicide, but still the no decrease in the suicide rate, in fact, it is increasing day by day. 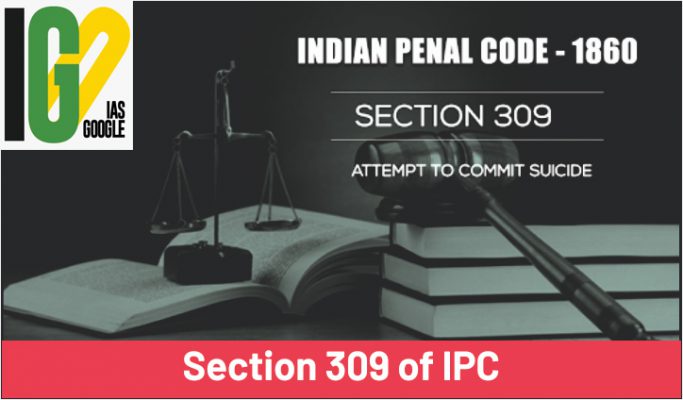 Soon after the suicide of actor Sushant Singh Rajput, the conversation moved around the sensitivity with which issues surrounding mental health should be handled. However, one of the most archaic laws that punishes attempts to commit suicide – Section 309 of the Indian Penal Code (IPC) — contrary to popular perception that it has been repealed, continues to exist in the statute book and, as reports suggest, is often misused. Anyone who survives an attempted suicide can be booked under Section 309 IPC, which deals with “Attempt to commit suicide”.

The section reads: “Whoever attempts to commit suicide and does any act towards the commission of such offence, shall be punished with simple imprisonment for a term which may extend to one year (or with fine, or with both)”.

The law, brought in by the British in the 19th century, reflected the thinking of the time, when killing or attempting to kill oneself was considered a crime against the state, as well as against religion.

But wasn’t Section 309 repealed a few years back?

No. The section continues to remain in the IPC. What has happened though, is that The Mental Healthcare Act (MHCA), 2017, which came into force in July 2018, has significantly reduced the scope for the use of Section 309 IPC — and made the attempt to commit suicide punishable only as an exception.

Section 115(1) of The MHCA says: “Notwithstanding anything contained in section 309 of the Indian Penal Code any person who attempts to commit suicide shall be presumed, unless proved otherwise, to have severe stress and shall not be tried and punished under the said Code.”

Section 115(2) says that “The appropriate Government shall have a duty to provide care, treatment and rehabilitation to a person, having severe stress and who attempted to commit suicide, to reduce the risk of recurrence of attempt to commit suicide.”

But this seems as good as repealed, even if the section does continue to be in the IPC?

Not quite. The restrictions put on the use of this section under the provisions of the MHCA — as opposed to it being removed from the statute all together — do not seem to be enough simply because of continued reports of its use by police forces across the country.

In one recent example, on June 8, a runaway couple allegedly attempted suicide at Ashoknagar police station in Bengaluru by consuming hair dye. Local media reported that they were booked under Section 309. Again, on May 20, an inmate at Gurgaon’s Bhondsi jail who had allegedly tried to kill himself with a pair of scissors, was reported to have been booked under Section 309 IPC.

Several senior police officers said that on many occasions, there is lack of awareness among officers at the level of the police station about the relatively new MHCA, and they simply go by the IPC. However, the charge under Section 309 is often dropped subsequently, following consultations with senior officers, said Harssh Poddar, Superintendent of Police, Beed.

What problems can arise out of the use of this Section?

Chennai based psychiatrist Dr Laxmi Vijaykumar, who is also a member of the WHO’s Network on Suicide Research and Prevention, said that use of this Section can potentially deprive a victim of treatment in the golden hour, as hospitals wait for a go-ahead from police in what would be seen as a “medico-legal case”.

It is possible that unscrupulous hospital authorities may misuse this situation and charge extra to “hush up” the case by not informing the police; similar extortion is possible on the part of corrupt police personnel as well.

All of this is in addition to the trauma and harassment that an already severely distressed individual and people around him/her would likely be going through. Only 24 countries around the world have a section such as this in their laws, experts said.

But is there another side to this story?

It is possible that there might be one — and this is where the argument in favour of Section 309 IPC co-existing with the provisions of the MHCA, 2017, comes in.

A veteran police officer who declined to be identified said there were occasions when people showed up at government offices and threatened to kill themselves if their demands were not met. “It is in these cases, where we suspect that the person does not intend to commit suicide but is using the threat as a way to unfairly pressure or blackmail the system, that this section is used.”

A senior IPS officer said, “If 309 is repealed, there will be no provision to take action against those who intend to create trouble of this sort.” SP Poddar said: “Section 309 IPC can be redefined in such a manner where it can still be leveraged in law and order situations, and not be used against those who are suffering from genuine mental health issues.”

What attempts have been made to repeal Section 309 in the past?

Dr Vijaykumar, who has been advocating that the section be repealed, said that the process has been ongoing for years.

In 1971, the Law Commission in its 42nd Report recommended the repeal of Section 309 IPC. The IPC (Amendment) Bill, 1978, was even passed by Rajya Sabha, but before it could be passed by Lok Sabha, Parliament was dissolved, and the Bill lapsed.

In ‘Gian Kaur vs State of Punjab’, 1996, a Constitution Bench of the Supreme Court upheld the constitutional validity of Section 309. However, in 2008, the Law Commission in its 210th Report, said that an attempt to suicide needed medical and psychiatric care, and not punishment. In March 2011, the Supreme Court too recommended to Parliament that it should consider the feasibility of deleting the section.

In 2014, repling to a question in Rajya Sabha, then Minister of State for Home Haribhai Parthibhai Chaudhary said the government had decided to drop Section 309 from the IPC after 18 states and 4 Union Territories had backed the recommendation of the Law Commission. The matter did not, however, reach its logical conclusion.

The Bombay High Court in this case opined that Section 309 of the IPC is contrary to the ideals of Equality before Law and Right to Life, enshrined under articles 14 and 21 of the Constitution of India respectively. While referring to the presence of Right to Remain Silence under the ambit of Right to Freedom of Speech and Expression, the court ruled that Right to Life under article 21 also contains the Right NOT to live. The Court observed that “those who make the suicide attempt on account of the mental disorders require psychiatric treatment and not confinement in the prison cells where their condition is bound to worsen leading to further mental derangement. Those on the other hand who make the suicide attempt on account of acute physical ailments, incurable diseases, torture or decrepit physical state induced by old age or disablement need nursing homes and not prisons to prevent them from making the attempts again.”

In this landmark judgment by a Division Bench, the Hon’ble Supreme Court held the following that;

Right not to live a forced life is a part of Right to Life. Suicide is a psychiatric problem and not a manifestation of criminal instinct. What is needed to take care of suicide-prone persons are soft words and wise counseling (of a psychiatrist), and not stony dealing by a jailor following harsh treatment meted out by a heartless prosecutor. Therefore, the court proclaimed repealing Section 306 in order to humanize the Penal Code and laws contained in it.

The Hon’ble Supreme Court in this case over-ruled the judgment given by the High Court of Delhi and Mumbai in the above stated cases. The court upheld constitutional validity of Section 309 of the IPC. According to the view taken by the court, Right to Life could not be stretched to the extent of including Right to die under the ambit of article 21. Hence, attempted suicide was got protection of this constitutional bench.

42nd Report of the Law Commission

In the year 1971, 42nd law commission report was prepared by the Fifth Law Commission under chairmanship of Mr. K.V.K. Sundaram. In its report on Indian Penal Code, 1860, the Commission talked about Section 306 of the IPC, under following heads; view of Ancient and British law makers about this subject followed by a proposal to repeal section 309 and substitute it with new penal provisions, to punish those who cause a person to take extreme step of ending his/her life.

The commission stated that Manu’s code and various commentaries on it, held commission of suicide valid, in case the person was diseased and living under miserable and unfortunate conditions. Among Brahmins, one who got rid of his body, was taken into high regard and considered to have left the earthly pleasures, sorrow and pain behind. The report went on describing view taken by British writers to de-criminalize the act of attempted suicide.

Therefore, Law Commission recommended repealing the ‘harsh and unjustifiable’ provision. Insertion of a new provision to punish those, who by their persistent acts of cruelty force a family member to commit suicide, with imprisonment of up to 3 years and fine, was proposed.

156th Report of the Law Commission

The 156th report of Law Commission presented in the year 1997, recommended ‘retention’ of criminalization of attempt to commit suicide or to say this report favored punishment for attempt to suicide. This report was influenced by new developments in medical science and law.

While relying on the legal position laid down by the Hon’ble Supreme Court in the case of Gian Kaur, that article 21 can’t be stretched and interpreted to include ‘right to die.’ Ihis report emphasized the fact that Supreme Court upheld constitutional validity of this section only after giving due consideration to relevant principles of Law.

This report further supported its argument by bringing the issues of narcotic- drug trafficking and terrorism. It was thought by the commission that a terrorist or a drug- trafficker who failed in his attempt to take life of his own and his targets, deserved to be charged under section 306 for disturbing the law and order situation in the society.

The 210th report of law commission, chaired by Dr. Justice AR. Lakshmanan and presented on October 17, 2008 titled ‘Humanization and Decriminalization of Attempt to Suicide’, recommended repealing section 309 of IPC. The commission recommended the following;