Having seized the initiative by securing approximately 40-60 square km of Indian territory in three different areas, China will be negotiating from a position of strength and will try to impose unacceptable conditions–no further development of border infrastructure on the Indian side–to restore status quo on its own terms. If diplomacy fails, China has come prepared for a border skirmish or a limited war. India’s task is cut out.

There is always a temptation among analysts to link China’s border depredations against India to episodic elements in the bilateral relationship. While China has certainly used the ‘un-demarcated’ Line of Actual Control (LAC) as leverage against India in the past, the nature of the latest Chinese intrusions suggest that Zhongnanhai’s actions are driven by a historical tendency – that of expanding in the Himalayan borderlands at times of internal tumult. And despite the overall posturing, China is indeed grappling with internal economic and security problems exacerbated by the pandemic. 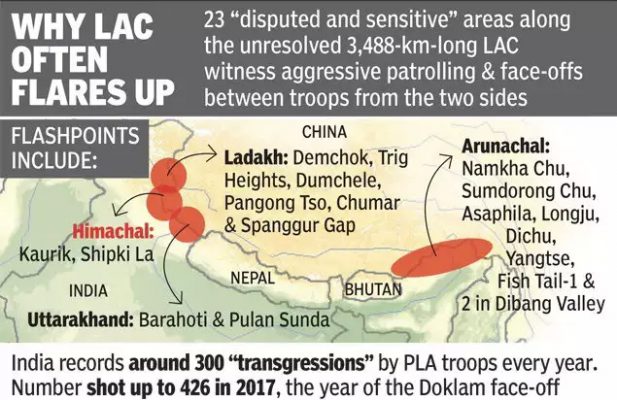 For India, this means that its traditional policy of pursuing confidence-building measures (CBMs) to dial down tensions will not work sustainably. Not one to look a gift horse in the mouth, China may even signal a temporary pause, only to keep striving to extend its claims wherever the People’s Liberation Army Ground Force (PLAGF) needs to and thinks it can, thereby making the LAC increasingly meaningless. India must read the tea leaves and realise that it will have to push back hard, however trying its own internal circumstances might be.

The nature of the Himalayan watershed dictates that any power to its north must seek to exert influence to its south (or west) and vice versa. Mao Zedong famously articulated this atavistic compulsion with his so-called ‘Five Fingers of Tibet’ formulation, wherein he saw Ladakh, Nepal, Sikkim, Bhutan and Arunachal Pradesh as the five fingers of the right-hand palm that is Tibet. From the Chinese perspective, maintaining a steady hold over the Tibetan plateau ultimately requires being able to project power on the other side of Himalayan watershed, i.e. in the Five Fingers.

This stems from the historical geography of the Himalayan region, which allows the generation of bi-directional territorial claims between Tibet and the Five Fingers resulting in a bedrock of tension between the northern and the southern power that is ultimately tempered by a balance of military capability. This is the key reason why India and China have not been able to arrive at a boundary settlement and are unlikely to anytime soon.

Chinese empires in the past have sought to expand in the Himalayan region while in the throes of internal problems. This was the case with the Qing invasion of Tibet in 1910 that was followed by forays into what is today Eastern Arunachal Pradesh, right at the very death of the empire itself. This was also the case in the run up to the India-China war of 1962, which took place amidst Mao’s tragic ‘Great Leap Forward’.

It is almost as if China seeks to ‘settle’ its vulnerable western borderlands while it still can. Naturally, such a policy also conveys strength of purpose to both internal and international audiences, the latter being important in view of plummeting Sino-US ties. But it requires giving greater operational leeway to the executors of this policy, which in today’s context is the PLAGF.

PLAGF has become rather busy along stretches of the LAC that were considered “almost settled”. Take, for instance, the unprecedented stand-off that took place in Naku La in Sikkim in early May. This after Sikkim had apparently stopped being an issue between India and China, to echo the then Chinese premier Wen Jiabao’s words of 2005. Then there is Ladakh, where the most serious Chinese intrusions since 1962 have taken place this May and that too in sectors where the Chinese had “voluntarily” stopped in 1962, having reached their claim line.

One is, of course, referring to the PLAGF intrusion in the Galwan Valley, where it has sought to move closer to the point where the Galwan meets the Shyok, thereby threatening India’s new Darbuk-Shyok-DBO road, a key artery for sustaining India’s posture in Eastern Ladakh. And on the northern shores of the Pangong Tso, which is characterised by eight mountain spurs or ‘fingers’ jutting into the lake, numbered 1-8 in a West-East direction, Chinese troops today are feared to be in occupation of a small Indian observation post on Finger 4 which used to see temporary deployments, according to intelligence sources who spoke to this writer.

Till not so long ago, Chinese boat patrols used to patrol mostly between Fingers 5 and 8. Incidentally, India’s claims are till Finger 8, although its hold was limited till Finger 4. So, the PLAGF has now even removed the fig leaf of ‘differing perceptions’ with its latest intrusions, since they have taken place in areas where the Chinese were already sitting on their claim lines of 1962.

The PLAGF focus on Ladakh is hardly surprising. It is a particularly important ‘finger’ that has been used in the past to extend claims over Tibet. During 1590-1640, the Ladakhi kingdom controlled the Ngari part of Tibet as far as the Mayum La, which forms the watershed between the Sutlej and Tsangpo river basins. Rudok, Gartok, Guge and the Purang Valley (which is right next to the Lipulekh Pass and is being disputed vehemently by Nepal) were all under the authority of the Gyalpo of Leh till about 1684.

Besides being a source of claims, Ladakh has also served as a launchpad for claimants. After all, the narrow valleys abutting the shores of the Pangong Tso, besides being historic trade routes, can also serve as axes for advance into Western Tibet. Especially the East-West stretch or ‘gap’ lying between the southern shore of Pangong and the northern shores of the much smaller Spanggur Tso, which was the route taken by one part of General Zorawar Singh’s invasion force into Tibet in the 19th Century.

So, the PLAGF’s latest moves are aimed at stunting the Indian Army’s growing offensive potential while preserving its own, given that the Chinese have already completed their border works. And the nature of the intrusions shows that they are not designed to merely provide leverage before the next round of Special Representative talks or for India to make concessions in the souring bilateral economic relationship or as a warning to stay away from the American-led Quad.

Rather, China is driven by the much more primordial consideration of firming up its Himalayan underbelly while it holds certain advantages, and the PLAGF is clearly digging in and reinforcing their latest encroachments. Delhi must understand that any further CBMs to ‘reassure’ China will only be misused by the latter to render the LAC utterly meaningless.

Instead, India must stay the course, since the Chinese are less likely to move on Arunachal Pradesh in the future if India enhances its potential to launch ripostes via Ladakh and Sikkim. The conciliatory noises by Chinese diplomats must be ignored as long the PLAGF squats on what has long been considered Indian territory even if one were to go by China’s 1962 claim line. In any case, it is the PLAGF which is now implementing Chinese frontier policy and not Beijing’s foreign office. Incidentally, Ladakh has also been selected by the PLAGF for its affections because any long India-China stand-off will allow Pakistan to ultimately jump into the fray, something that I am sure New Delhi is aware of.