Rajya Sabha’ or the ‘Council of States’ is the second chamber of the Indian parliament, which traces its origin to the Montagu-Chelmsford Reforms, 1919.

Rajya Sabha as the second chamber of the parliament intended to play certain roles as a permanent house (it never dissolves like Lok sabha and one-third of its members retire every two years), revisionary house (reconsidering bills passed by the Lok Sabha) and offers a degree of continuity in the underlying policies of laws passed by parliament.

Along with this, Rajya Sabha also acts as a means to institutionalise the federal principle of power-sharing between the Centre and states.

However, the role and relevance of Rajya Sabha have been a matter of debate which can be traced from discussions in constituent assembly to recent times.

Against the Rajya Sabha

In favour of Rajya Sabha

How the ‘Rajya Sabha’ is constituted?

The proceedings of the house are presided over by the Vice-President of India who is the ex-officio Chairman of the ‘Rajya Sabha’. The house elects a Deputy Chairman amongst its members. In addition, there is a Panel of Vice-Chairmen comprising of not more than 6 members. One of the members of the Vice-Chairmen panel presides over the proceedings of the House in the absence of the Chairman and the Deputy Chairman. The Chairman also appoints a Secretary-General who renders advice on critical parliamentary matters.

Current laws have the provision for a maximum of 245 members in the ‘Rajya Sabha’. The ‘Lok Sabha’ members are directly elected by the people of India whereas the ‘Rajya Sabha’ members are indirectly elected by the legislatures of the state and the union territories with the aid of single transferable votes. Around 12 members of the house are appointed by the Chairman who have exemplary contributions in the world of literature, art, science and social services.

When Parliament is bicameral, the distribution of powers between them becomes a complicated matter. While the Senate, the American second Chamber, is made more powerful than its counterpart, most of the countries have favoured the lower House. However, our Constitution has intended to strike a balance between them, though, ultimately, our Lok Sabha has been offered a preponderant position in some ways.

It is true that in some important matters, both the Houses have equal power. For example, regarding the ordinary Bills, the two Houses enjoy equal authority. Such Bills can be raised in either House and if passed there, they are sent to the other House. When it is accepted there, it is referred to the President for his assent which makes it a law. Thus, such a Bill cannot be a law without the discussion in both the Houses.

Regarding the impeachment of the President, the two Houses equally share power. Under Art. 61, the motion may be raised in either House and if it is accepted by the majority of its total members and also two-thirds of the members present and voting, it is sent to the other House. When the latter accepts it in the similar way, the President has to step down. In other words, neither of them can, unilaterally, oust him from the high office.

Under Art. 368, no amendment of the Constitution is possible unless two Houses agree on it. In other words, such a Bill must be passed by both the Houses.

Similarly, equal power has been given to them regarding the approval of Emergency provisions. The President can promulgate Emergency in three cases – national crisis, Constitutional breakdown and financial deadlock (Art. 352, Art. 356 and Art. 360). But the Presidential proclamation must be accepted by both the Houses.

Under Art. 54, the two Houses equally take part in the Presidential election. Similarly, Art. 66 states that they form an ‘electoral college’ in order to choose the Vice-President.

Last, but not the least, the Rajya Sabha can pass a resolution to drive out the Vice-President, but it requires the approval of the other House (Art. 67-b).

No equal Representation of states

Steps to Be Taken

Since the ‘Lok Sabha’ decisions may go in favour of the populist sentiment and force the members to go contrary to the best judgment, the ‘Rajya Sabha’ keeps a check and balance on it. Unlike the House of Lords in Britain, the ‘Rajya Sabha’ members do not hold the hereditary membership rights. Our leaders rejected a similar plea placed by the erstwhile kings and princes and ruled in favour of indirect elections. ‘Rajya Sabha’ also provides a platform to the small and regional parties to present their views.

The rights of the Indian citizens need to be actively protected. Hence, the relevance of the bicameral parliament structure becomes even bigger. The ‘Rajya Sabha’, the bureaucracy and the judiciary act as the 3-layered wall that sees to the upkeep of the principles of a democratic republic like India. 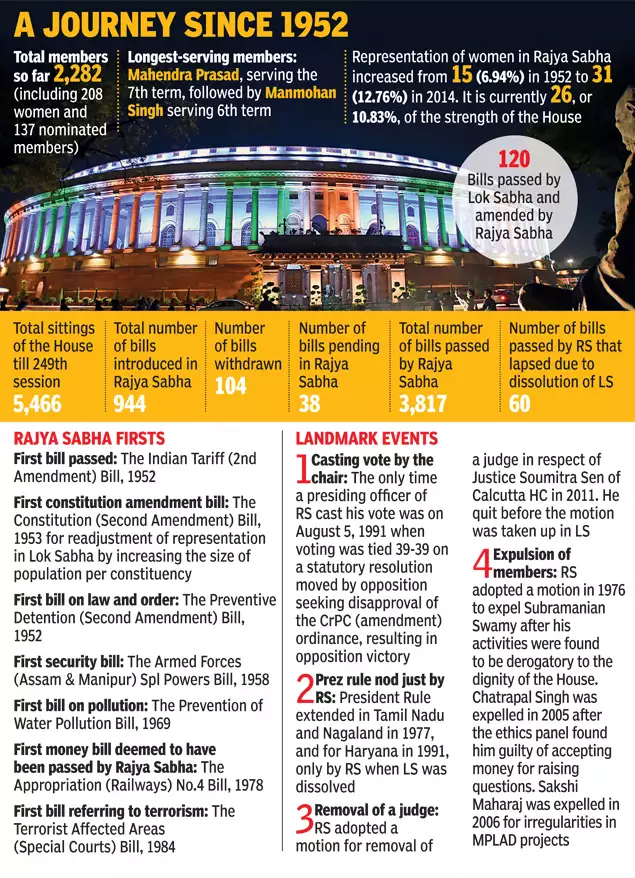