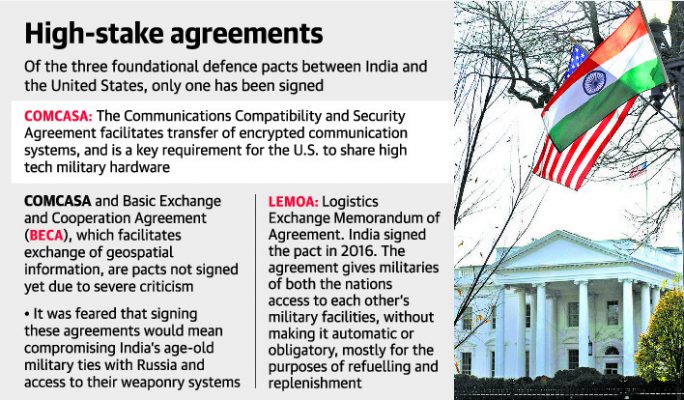 India and the United States on 27 October 2020 signed the Basic Exchange and Cooperation Agreement (BECA), which, along with the two agreements signed earlier — the Logistics Exchange Memorandum of Agreement (LEMOA) and the Communications Compatibility and Security Agreement (COMCASA) — completes a troika of “foundational pacts” for deep military cooperation between the two countries.

BECA will help India get real-time access to American geospatial intelligence that will enhance the accuracy of automated systems and weapons like missiles and armed drones. Through the sharing of information on maps and satellite images, it will help India access topographical and aeronautical data, and advanced products that will aid in navigation and targeting.

This could be key to Air Force-to-Air Force cooperation between India and the US. Just as your radio cab (or the GPS in your smartphone) helps you zero in on the path to your destination and helps you reach it quickly and efficiently, BECA will provide Indian military systems with a high-quality GPS to navigate missiles with real-time intelligence to precisely target the adversary.

Besides the sailing of ships, flying of aircraft, fighting of wars, and location of targets, geospatial intelligence is also critical to the response to natural disasters.

The signing of BECA flows from the commitment in the joint statement during President Donald Trump’s visit in February this year, when the two sides said they looked forward to an “early conclusion” of BECA.

And what is the Logistics Exchange Memorandum of Agreement (LEMOA) about?

LEMOA was the first of the three pacts to be signed in August 2016. LEMOA allows the militaries of the US and India to replenish from each other’s bases, and access supplies, spare parts and services from each other’s land facilities, air bases, and ports, which can then be reimbursed.

LEMOA is extremely useful for India-US Navy-to-Navy cooperation, since the two countries are cooperating closely in the Indo-Pacific. To put the usefulness of this agreement in simple terms, it is like being able to stop at a friend’s garage or workshop to refuel your car or get it repaired when you are far away from your own home or workshop.

The critical element that underpins LEMOA is mutual trust. Without trust, no country will be willing to expose its military and strategic assets such as warships to the facilities of another country.

The signing of LEMOA was in itself an affirmation of the mutual trust between the two militaries, and its application will enhance the trust. It took almost a decade to negotiate LEMOA, and the exercise in a sense bridged the trust deficit between India and the US, and paved the way for the other two foundational pacts.

While India had indeed provided ad hoc logistics support to the US in the past — such as allowing the refuelling of American aircraft in Bombay during the first Gulf War in 1991, and letting US warships visit Indian ports during the war on terror after 9/11— the signing of LEMOA has institutionalised this process and made it smoother.

What about the Communications Compatibility and Security Agreement (COMCASA)?

COMCASA was signed in September 2018, after the first 2+2 dialogue during which then External Affairs Minister Sushma Swaraj and then Defence Minister Nirmala Sitharaman met the visiting Secretary of State Michael R Pompeo and then Secretary of Defence James N Mattis.

The pact allows the US to provide India with its encrypted communications equipment and systems so that Indian and US military commanders, and the aircraft and ships of the two countries, can communicate through secure networks during times of both peace and war. Again, to take a simple example, it’s like being able to exchange messages or communicate with a friend on WhatsApp, Signal, or Telegram in real time and in a secure manner.

The signing of COMCASA paved the way for the transfer of communication security equipment from the US to India to facilitate “interoperability” between their forces — and potentially with other militaries that use US-origin systems for secure data links.

What is the specific context of these pacts, and their practical benefit to India?

The strengthening of the mechanisms of cooperation between the two militaries must be seen in the context of an increasingly aggressive China, which threatens a large number of countries in its neighbourhood and beyond, and which has been challenging several established norms and aspects of international relations.

Amid the ongoing standoff on the Line of Actual Control (LAC) in Ladakh — the longest and most serious in three decades — India and the US intensified under-the-radar intelligence and military cooperation at an unprecedented level, especially since June.

And what is the big picture on the signing of these foundational pacts with the US and the way forward?

As mentioned above, it marks, above all, the enhancement of mutual trust and a commitment to the long-term strategic relationship. With these key defence pacts in place, cooperation between the US and India can take place in a more structured and efficient way, rather than in episodic bursts.

While LEMOA means one partner trusts the other enough to expose its valuable assets, COMCASA means one is confident that it can rely on encrypted systems to connect the two militaries. And the latest pact, BECA, means the countries can share highly classified information in real time without fear of being compromised.

The US wants India to move away from Russian equipment and platforms, as it feels this may expose its technology and information to Moscow. So far, India is going ahead with the purchase of the S-400 air defence missile system from Russia, and this has been a sticking point for American interlocutors.

For its part, India is wary of Pakistan’s deep-rooted ties with the Pentagon, and Washington’s dependence on Rawalpindi for access to Afghanistan as well as its exit strategy.

But, because of the clear and present danger from China, New Delhi’s strategic embrace of Washington is the obvious outcome. The Indian defence establishment has already used at least five American platforms at the LAC— C-17 Globemaster III for military transport, Boeing’s Chinook CH-47 as heavy-lift helicopters, Boeing’s Apache as tank-killers, P-8I Poseidon for overland reconnaissance, and Lockheed Martin’s C-130J for airlifting troops.