Nepal decided to publish new maps which will include areas of dispute with India. Nepal’s PM said that diplomatic efforts will be made to bring back the territories.

Nepal recently approved its new political map showing its claim over Lipulekh, Kalapani and Limpiyadhura territories, raising a matter of concern for India. As of now, Nepal has not released the Map publically, however, it is expected to be published soon. The move has been strongly condemned by India as “unjustified cartographic assertion”.

Earlier in November 2019, India released its new political map showing Kalapani as a part of its territory, which was objected by Nepal. The new India map also showed Pakistan-occupied Kashmir as a part of its newly created UTs Jammu & Kashmir and Ladakh.

Kalapani is the first big reason behind Indo-Nepal border controversy, followed by Lipulekh. Lipulekh is located in a far west point near Kalapani, an area of territorial dispute between India and Nepal. Both the countries claim these regions as part of their territory. India claims Kalapani as part of Pithoragarh district of Uttarakhand’s and Nepal claims it as a part of its Dharchula district. 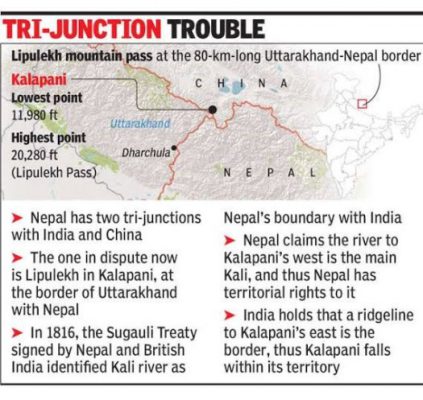 Lipulekh pass is located atop the Kalapani at a tri-junction between India, China and Nepal. The Indo-Nepal border dispute over Lipulekh dates back to 1997 when for the first time Nepal raise objections against the decision of India and China to open Lipulekh pass for travelling to Mansarovar.

Lipulekh pass is an ancient route made for trade and pilgrimage purposes by Bhutiya people. The route was closed by India following the Indo-China war of 1962. However, lately in the beginning of May 2020, India reopened the route for Kailash Mansarovar pilgrimage after constructing 22 km long road on the pass.

Why Lipulekh is a disputed territory between India and Nepal?

Lipulekh pass opens from Gunji village. Nepal claims that the village and the road is its territory. On the other hand, India and China signed a trade treaty in 1954 declaring Lipulekh pass as the Indian gateway. Moreover, both the countries signed another treaty in 2015 for trading through Lipulekh Pass. However, this time Nepal protested against the move staking claim over Kalapani area. 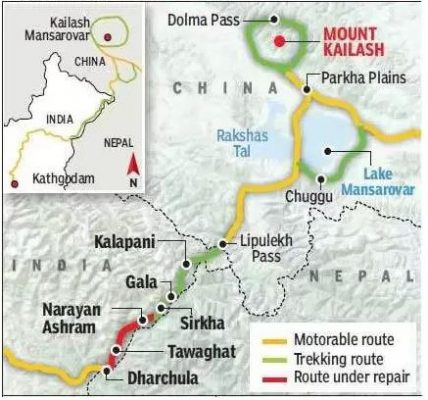 Kalapani, largely a valley, appears on the Kailash Manasarovar route and is located at an altitude of 3600m, bordering India’s Uttarakhand and Nepal’s Sudur Paschim Pradesh. Kalapani is majorly formed of Himalayan rivers know by the names Kali, Mahakali or Sharda in India & Nepal.

India and Nepal are bound to settle all the boundary disputes including Kalapani through bilateral talks under an agreement signed in 1998.

Have a look at some of the questions that answers your doubts about the Kalapani as a disputed territory between India and Nepal.

Who controls the Kalapani area?

India’s Indo-Tibetan Border Police has been controlling the Kalapani and nearby areas since the Indo-China war of 1962.

What is Nepal’s claim over Kalapani?

Nepali Government claims that towards the west of Kalapani flows the main Kali river which falls in its territory. As per the Treaty of Sugauli, the Kali River is located in Nepal’s western border that it shares with India. The treaty was signed between Nepal and British East India Company in 1816.

What is India’s claim over Kalapani territory?

Indian Government claims that a ridgeline located towards the east of Kalapani territory is a part of the Indian Union. The treaty of Sugauli mentions nothing about this ridgeline.

Why has there been dispute between India & Nepal over Kalapani?

Though treaty of Sugauli clearly mentions about the Kali River and its location in Nepal, there were a few subsequent maps drawn by British surveyors which show the origin of Kali river from different places. This digression from the treaty led to territorial disputes between India and Nepal. Even the size of Kalapani is different in various sources.

Treaty of Sugauli: Nepal and the British East India Company in 1816 signed the Treaty of Sugauli to end the territorial war. The treaty demarcated Uttarakhand’s Kumaon with River Kali as a boundary between India and Nepal. However, the river Kali has been shifting its course from time to time.

Origin of Rival Kali: The place of its origin is also not known. India claims that the river origins from streams of Kalapani and Nepal claims that river originates from its Kuthi Yankti stream.

Gunji Village: River Kali bisects the Byans area and the southeast of Byans includes the Gunji village which is claimed by Nepal as its territory. Gunji village is the gateway for Mansarovar Yatra. The Byans and its areas were transferred to Nepal by Britishers following the Treaty of Sugauli.

Although the people-to-people relationship between India and Nepal is unmatched, in recent times the not so good government-to-government relationship has curated many issues. In this context:

Boundary disputes are common ground for countries that have an ancient history and shared borders, and the India-Nepal border issues one such dispute. Thus, the two neighbouring countries should not let the war of maps deteriorate their historical ties.