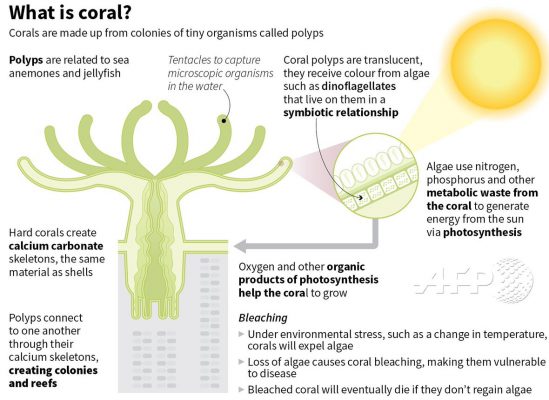 On 29 October 2020, the Mumbai civic body received the green signal from the Principal Chief Conservator of Forests (Wildlife), Nagpur, for translocating the corals off the coast of Mumbai for the Rs 12,700-crore Mumbai Coastal Road Project. The BMC aims to complete the translocation of 18 coral colonies over two days next month.

Corals exhibit characteristics of plants, but are marine animals that are related to jellyfish and anemones. Coral polyps are tiny, soft-bodied organisms. At their base is a hard, protective limestone skeleton called a calicle, which forms the structure of coral reefs? Reefs begin when a polyp attaches itself to a rock on the seafloor, then divides, or buds, into thousands of clones. The polyp calicles connect to one another, creating a colony that acts as a single organism. As colonies grow over hundreds and thousands of years, they join with other colonies, and become reefs. There are soft corals as well, which are non-reef-building, and resemble bushes, grasses, and trees.

The Mumbai coast hosts a tiny population of corals. The corals found across rocky patches along the Mumbai coastline are mostly fast-growing and non-reef building corals. Small coral colonies have been documented off Marine Drive, Geeta Nagar in Colaba, Haji Ali, and Worli.

The National Institute of Oceanography (NIO), appointed to study the presence of marine biodiversity along with the Coastal Road project area, has identified six coral species at Worli and Haji Ali: two species of the Rhizangiidae family (Oulangia and one unidentified species), with 18 colonies documented across 0.251 square metres in Worli; and another species (Dendrophylliidae family) along with Rhizangiidae across 1.1 square foot area at Haji Ali. These documented species are hard corals that are visible during low tide.

The colonies at Haji Ali will be translocated to Marine Lines, and those at Worli to some distance away from the construction site. The translocation of corals is at a nascent stage along the Indian coastline.

Pilot projects at the Lakshadweep islands, and off the coast of Kutch and Tamil Nadu have been undertaken to study the survival rate, method and site of translocation, and creation of high heat-resistant coral colonies, etc.

In a three-year-long project in Sindhudurg, corals were cultivated — fragments of corals were taken and attached to concrete frames with the help of nylon threads — and then left on ocean beds at a depth suitable for their growth.

In a project at the Andaman islands, ReefWatch Marine Conservation has transplanted coral fragments on to nine artificial structures, totalling a 20-square-metre area. The project has been on since 2017.

According to the American Scientific agency, the National Oceanic and Atmospheric Administration (NOAA), the rate at which corals grow depends on the species.

Some of the branching species can increase in height or length by as much as 10 cm a year (about the same rate at which human hair grows). Other corals, like the dome and plate species, are bulkier, and may only grow only 0.3 cm to 2 cm per year. A soft coral colony has the potential to grow at the rate of 2 cm to 4 cm per year.

Some experts are of the view that for a high survival rate, it is important to translocate corals in a place with similar environmental characteristics such as depth, current flow, amount of light, and pressure.

Harshal Karve, a marine biologist with Mangrove Foundation who identified 11 species of corals along the Mumbai coast, had suggested to the NIO and BMC to undertake the translocation post-monsoon, when the colonies would likely be healthy.

Coral reefs are like underwater cities that support marine life. According to the UN Environment programme, they provide at least half a billion people around the world with food security and livelihoods. Coral reefs also act as ‘wave breaks’ between the sea and the coastline and minimise the impact of sea erosion. In India, they are protected in the same way as the tiger or elephant, under Schedule I of the Wildlife Protection Act (WPA), 1972.

Climate change remains one of the biggest threats to corals. Around the world, this threat has been visible in the “bleaching” of corals — is a process during which corals, under stress from warm weather, expel the algae that give corals their brilliant colours and live in their tissues and produce their food.

The Great Barrier Reef off the coast of Australia, a UNESCO World Heritage site and home to one of the largest collections of coral reefs on the planet, has suffered six mass bleaching events due to warmer than normal ocean temperatures: in 1998, 2002, 2006, 2016, 2017, and now 2020. Experts have documented bleaching of the corals along Mumbai’s coastline as well.