Recently, three new farm laws were passed by the parliament to increase the relative role of markets without dismantling the MSP (Minimum Support Prices) system. These laws meet widespread protest from the farming community, especially in Punjab and Haryana.

Fearing the government will do away with the MSP is the bone of contention behind these protests. Farmers want higher and assured income through effective MSP, while the government is offering greater choices to farmers through markets, without demolishing the existing MSP system.

Further, Indian agriculture has, since the Green Revolution, turned the corner from scarcity to surplus. In a surplus agrarian economy, unless a greater role for markets is allowed, the MSP route will continue to drain public exchequer.

Hence, in order to achieve the target of doubling the farmer’s income, there is a need to reform the MSP system, make agriculture demand-driven and invest in agricultural infrastructure.

Need for Reforms in MSP Regime 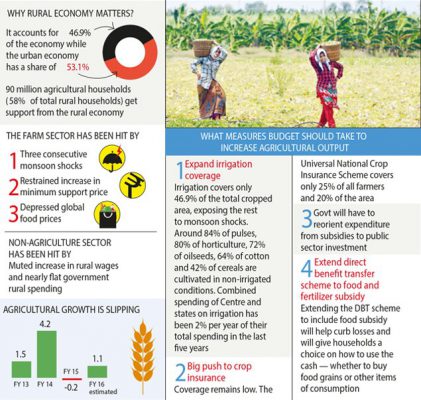 Agriculture lies at the backbone of Indian economy. Therefore, more sustainable solutions lie in augmenting productivity, diversifying to high-value crops, and shifting people out of agriculture to the high productivity sector.