Efforts towards regulating non-personal data are taking place in parallel to deliberations surrounding the regulation of personal data by the Joint Parliamentary Committee on the Personal Data Protection Bill, 2019 (PDP Bill).

The PDP Bill defines personal data as data about or relating to a natural person who is directly or indirectly identifiable. 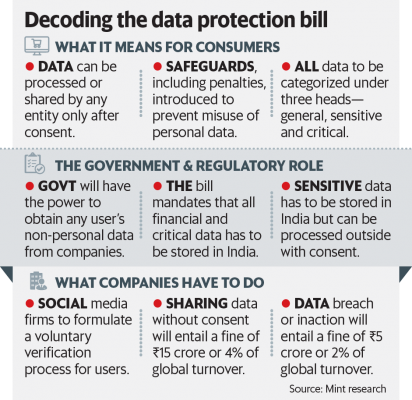 A government committee headed by Infosys co-founder Kris Gopalakrishnan has suggested that non-personal data generated in the country be allowed to be harnessed by various domestic companies and entities. The nine-member committee, while releasing the draft report, has kept time till August 13 for the public to send suggestions. It has also suggested setting up of a new authority which would be empowered to monitor the use and mining of such non-personal data.

Non-personal data is any set of data which does not contain personally identifiable information. This in essence means that no individual or living person can be identified by looking at such data. For example, while order details collected by a food delivery service will have the name, age, gender, and other contact information of an individual, it will become non-personal data if the identifiers such as name and contact information are taken out.

All the data collected by government and its agencies such as census, data collected by municipal corporations on the total tax receipts in a particular period or any information collected during execution of all publicly funded works has been kept under the umbrella of public non-personal data.

Any data identifiers about a set of people who have the same geographic location, religion, job, or other common social interests will form the community non-personal data. For example, the metadata collected by ride-hailing apps, telecom companies, electricity distribution companies among others have been put under the community non-personal data category by the committee.

Private non-personal data can be defined as those which are produced by individuals which can be derived from application of proprietary software or knowledge.

Unlike personal data, which contains explicit information about a person’s name, age, gender, sexual orientation, biometrics and other genetic details, non-personal data is more likely to be in an anonymised form.

However, in certain categories such as data related to national security or strategic interests such as locations of government laboratories or research facilities, even if provided in anonymised form can be dangerous.

In May 2019, the European Union came out with a regulation framework for the free flow of non-personal data in the European Union, in which it suggested that member states of the union would cooperate with each other when it came to data sharing.

Though the non-personal data draft is a pioneer in identifying the power, role, and usage of anonymised data, there are certain aspects such as community non-personal data, where the draft could have been clearer, experts said.

Other experts also believe that the final draft of the non-personal data governance framework must clearly define the roles for all participants, such as the data principal, the data custodian, and data trustees.