Prime Minister Narendra Modi has extended wishes to the Kashmiri Pandit community on the occasion of Jyeshtha Ashtami.

What is Jyeshtha Ashtami?

How is it celebrated?

Interestingly, another festival is held at the shrine on Asharha Ashtami with equal devotional fervour. It is believed that the sacred spring of the shrine miraculously changes its colour having been discovered on the Saptami of that month.

What is ‘Hub and Spoke Model’?

The hub and spoke model refers to a distribution method in which a centralised “hub” exists. Everything either originates in the hub or is sent to the hub for distribution to consumers. From the hub, goods travel outward to smaller locations owned by the company, called spokes, for further processing and distribution.

Benefits of ‘Hub and Spoke Model’ –

Example of ‘Hub and Spoke Model’ –

Madhya Pradesh Chief Minister has announced the launch of the ‘Rozgar Setu’ scheme, saying it would help secure employment for skilled workers who have returned.

What is ‘Rozgar Setu’?

Britain has said recently that is was pushing the US to form a club of 10 nations that could develop its own 5G technology and reduce dependence on Huawei.

Britain has labelled Huawei a “high-risk” vendor and therefore its involvement in the UK’s 5G upgrade comes with a 35% market cap, including a ban on its participation in the sensitive “core” of the network.

The Telecom Regulatory Authority of India has recommended that a new National Numbering Plan be issued at the earliest so that a uniquely identifiable number can be provided to every subscriber in India.

Some of the options that TRAI has recommended include switching to a 11-digit mobile number, reallocation of mobile numbering resources surrendered by operators who have shut shop and prefixing zero for all mobile calls made from fixed line.

World coronavirus dispatch: US to end ties with WHO for not nailing China

US President Donald Trump has announced that he is terminating the country’s relationship with the World Health Organisation. He has accused the WHO of failing to hold Beijing to account over the coronavirus pandemic.

Why is it significant?

World Health Organisation is funded through –

A team of researchers from Netherlands went back to look at the frozen antibodies that recognised the 2002 Sever Acute Respiratory Syndrome (SARS-CoV), which they had stored in the early 2000s during the outbreak. Surprisingly, one of the antibodies was found to recognise the infection due to the novel coronavirus, SARS-CoV-2. The study showed that it can help block infection in cultured human cells.

What has been found?

What they intend to do?

How will it work?

The fused B-cells called hybridomas are grown individually and tested whether they make an antibody that would recognise the target. Because they come from single B-cells hybridomas, they make only one specific antibody which is called a monoclonal antibody. When a monoclonal-like antibody is given to patients it does its work immediately, that is, much faster that the body could make its own antibodies.

What is a monoclonal antibody?

‘Mono’ means ‘one’ and ‘clone’ means ‘identical copy’. Monoclonal antibodies are identical copies of one type of antibody.

Antibodies are proteins produced by a type of white blood called lymphocytes. Pathogens have proteins on their surface called antigens. When a pathogen infects the body, the lymphocytes recognise these antigens as foreign and attack them by producing antibodies.

Antibodies bind to specific antigens on pathogens. This means that only one type of antibody will bind to a matching antigen. Scientists discovered that we could make antibodies to bind to antigens on other substances, and not just those on pathogens. Once bound, the antigens – and the substances they are found on – are merged tightly together. This makes them easier to identify and deal with.

Formation of a monoclonal antibody 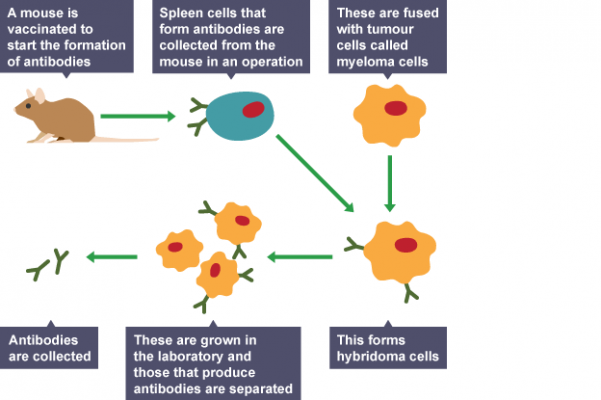 Pregnancy test sticks use monoclonal antibodies to tell if a woman is pregnant.

Monoclonal antibodies have also been designed to treat cancer by:

Monoclonal antibodies are also used in a similar way to identify and diagnose infections, such as HIV and AIDS, herpes and chlamydia.

Some monoclonal antibodies have been attached to dyes that will glow fluorescent under UV light. This can make disease identification much easier.

Monoclonal antibodies can be designed to bind to, and identify, almost any substance. They can be used for many purposes:

The human body is very complicated. Scientists originally thought that monoclonal antibodies would be a ‘magic bullet’ and would be able to identify and treat many medical conditions. Tests have revealed, however, that this is not the case. The interactions in the human body has resulted in unwanted side effects. This means they are not as widely used by doctors as originally thought.

In 2006 a drug trial involving humans using monoclonal antibodies to treat conditions such as arthritis and leukaemia went wrong. Despite the individuals being given very low doses, it resulted in organ failure but was not fatal. The monoclonal antibodies had been safely used in other animal trials before being used in human trials. This is an example of how careful we must be during drug development.