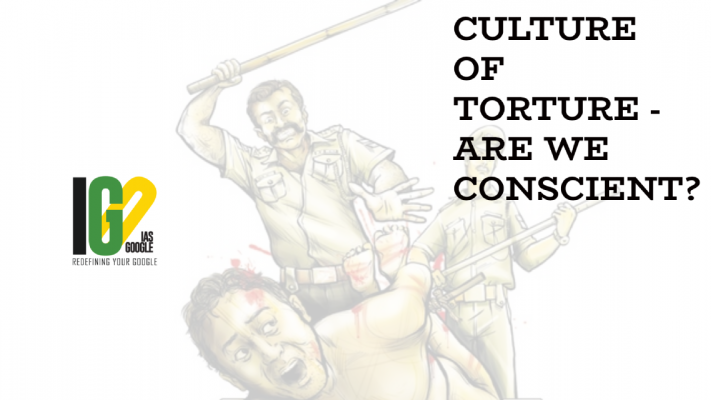 Custodial torture is one of the worst forms of barbarism. The rule of law cannot survive when protectors turn into oppressors. Any form of custodial treatment or behaviour that is degrading and contrary to human dignity strikes a heavy blow at Article 21 of Indian Constitution.

By now, everyone has heard of the tragic deaths of P. Jayaraj and J. Benicks, a father-son duo in a small town in Thoothukudi. Jayaraj, 58, was arrested by the police following an altercation with them on keeping his son’s mobile phone shop open in violation of lockdown rules. After Benicks was also taken into custody, the two were mercilessly thrashed to death.

Being found guilty of the ‘offence’ of keeping a shop open during the lockdown would have ordinarily granted Jayaraj and Benicks a maximum of only three months of imprisonment. The story, sadly, does not end with the police alone. Before the two men died, the police sought their remand, which a judge sitting in a court complex mechanically seems to have granted, without ever seeing the two men, or seeming to question the rationale for their remand. The series of events, starting with the cruel lockdown enforcement methods and concluding with the utterly gruesome and entirely avoidable deaths, is a sign that we are living with a completely broken system of law enforcement.

The Tamil Nadu Police has acquired notoriety over the decades for employing torturous methods for law enforcement. During my tenure as Chief Justice of the Madras High Court, several cases in this regard were brought to the court. But this issue is not restricted to Tamil Nadu alone. Torture is, in fact, an integral part of police culture all over the country. Indeed, it would not be amiss to argue that this culture in India today is reminiscent of the brutality of the colonial police forces that we are so keen to forget.

Official data also accept that police torture is a reality, but the quality of such data is always suspected. The pervasiveness of police torture is best understood in the compelling case found in reports made by NGOs and observers over the years, including by the Asian Centre for Human Rights, Amnesty International and People’s Union for Democratic Rights.

The data on torture show that it is not only an integral part of India’s policing culture; in some investigations (such as terror cases), it is treated as the centrepiece. The fact is that the current laws facilitate such torture, such as through the admissibility of confessions as evidence under the Terrorist and Disruptive Activities (Prevention) Actand the Prevention of Terrorism Act, which continues refurbished as the Maharashtra Control of Organised Crime Act. Unfortunately, policing has also not mainstreamed the upgrade to newer technologies, like DNA analysis, which can directly impact law enforcement practices.

What some have labelled as India’s “public secret” is tiptoed around in the international arena. The official position on state-sponsored or state-endorsed torture can be seen in a 2017 quote by India’s then Attorney-General. In his opening speech in Geneva at the country’s universal periodic review at the United Nations Human Rights Council, the Attorney-General invoked Gandhi and Buddha, stating that “India…believe[s] in peace, non-violence and upholding human dignity. As such, the concept of torture is completely alien to our culture and it has no place in the governance of the nation.” This would be a textbook example of hypocrisy, if ever.

Undoubtedly, the offending officers in the Thoothukudi case are being prosecuted, and some compensation will also be paid to the victims’ families. But such piecemeal action is not what is needed. What we really need is a recognition that torture is endemic and a systemic problem, and the only answer lies in stringent legal framework that is aligned with and committed to the principles of international law under the UN Convention Against Torture (UNCAT) to which India has been a signatory since 1997, and a watertight enforcement mechanism that deters such practices.

Even before India signed the UNCAT, our Supreme Court had brought about glorious jurisprudence highlighting the many problems with the country’s torture culture. In Raghbir Singh v. State of Haryana (1980), the Court was “deeply disturbed by the diabolical recurrence of police torture resulting in a terrible scare in the minds of common citizens that their lives and liberty are under a new peril when the guardians of the law gore human rights to death.” These sentiments were revisited in Francis Coralie Mullin v. Union Territory of Delhi (1981) and Sheela Barse v. State of Maharashtra (1987), where the Court condemned cruelty and torture as violative of Article 21. This interpretation of Article 21 is consistent with the principles contained in the UNCAT. The UNCAT aims to prevent torture and other acts of cruel, inhuman, or degrading treatment or punishment around the world.

Although India signed the UNCAT in 1997, it is yet to ratify it. In 2010, a weak Prevention of Torture Bill was passed by the Lok Sabha, and the Rajya Sabha later sent it to a Select Committee for review in alignment with the UNCAT. (I, too, appeared before this committee in 2010 after retirement from judicial office). But the Committee’s recommended law, submitted in 2012, never fructified, as the then UPA government allowed the Bill to lapse. In 2016, Ashwani Kumar, a senior advocate and former Union Minister of Law, sought the enactment of a torture law via a Supreme Court petition. By 2017, the Law Commission had submitted its 273rd report and an accompanying draft torture law. But the Supreme Court dismissed the petition on grounds that the government cannot be compelled to make a law by mandamus; treaty ratification was a political decision; and that it was a policy matter. A second petition on the issue filed by Mr. Kumar also met the same fate as the first one.

This rejection was a sign of the Supreme Court turning its back on its own glorious jurisprudence, and its efforts to aid law-making in the past, whether in using the Convention on the Elimination of all Forms of Discrimination Against Women to reform the law around workplace sexual harassment; or customary international law in environmental cases; or the right to privacy — this long and varied list is revelatory of a proactive Court that sees itself as responsible for nudging Parliament into legislative action.

Even with failings, the Commission’s draft Bill is better than not having one at all. A version based on this draft was circulated to State governments for views, but nothing has come of it, and nothing is likely to, either. This reluctance is arguably because all governments appear to collectively agree that police brutality is a necessary evil to maintain law and order.

The absence of a standalone legislation on custodial torture means that the Supreme Court’s guidelines issued in the DK Basu case (1997) remain a matter of mere academic interest for decades. There is no system in place to speedily prosecute delinquent police officers, to lodge complaints relating to custodial torture, to deal with the issue of evidence and burden of proof, to ensure speedy and fair investigation into custodial violence, to speedily dispose of complaints, to protect witnesses and complainants, to detect custodial violence using advanced scientific methods, or to sensitise police officers.

Neither the Home Ministry nor this government is likely to take up the torture law. Indeed, the manner in which the torture bill has been treated reveals a betrayal of the people of India by successive governments. There have been opportunities for 23 years to enact a law on torture, but they have been studiously avoided. State consultation also has no meaning. It is evident that all governments enjoy the status quo, where the police are used as a tool for self-preservation. Any disequilibrium is not politically desirable.

As disheartening as this may seem, all is not lost. There is much inspiration around us. Days after George Floyd was killed in Minneapolis in the U.S., when a policeman held him in an 8-minute-46-second-chokehold, the #BlackLivesMatter movement emerged, with many Indians joining in too. The movement, led by the people, started a national debate in the U.S. on policing, including radical reforms such as defunding and disarming the police. Arguably we need a people’s movement at home too that will bring about the necessary legislative changes that the Law Commission has suggested, and that encourages institutions to #EndTortureToday. Only the people can rise up against these practices, just as they are doing in other parts of the world. And by people, I include important stakeholders like the Bar, the media, civil society and student groups. Each of these have relevant roles to play in bringing about the change we want to see. It is merely a matter of who decides to pick up the mantle first.