Game theory offers plenty of reasons to worry once soft arms races turn into hard ones. That is because the world has become more complex since the Cold War

In mid-April, a report issued by the United States State Department on “Adherence to and Compliance with Arms Control, Nonproliferation, and Disarmament Agreements and Commitments (Compliance Report)” raised concerns that China might be conducting nuclear tests with low yields at its Lop Nur test site, in violation of its Comprehensive Nuclear-Test-Ban Treaty (CTBT) undertakings.

The U.S. report also claims that Russia has conducted nuclear weapons experiments that produced a nuclear yield and were inconsistent with ‘zero yield’ understanding underlying the CTBT, though it was uncertain about how many such experiments had been conducted.

Russia and China have rejected the U.S.’s claims, but with growing rivalry among major powers the report is a likely harbinger of a new nuclear arms race which would also mark the demise of the CTBT that came into being in 1996 but has failed to enter into force even after a quarter century.

For decades, a ban on nuclear testing was seen as the necessary first step towards curbing the nuclear arms race but Cold War politics made it impossible. A Partial Test Ban Treaty was concluded in 1963 banning underwater and atmospheric tests but this only drove testing underground. By the time the CTBT negotiations began in Geneva in 1994, global politics had changed. The Cold War had ended and the nuclear arms race was over. The Union of Soviet Socialist Republics, or the USSR, had broken up and its principal testing site, Semipalatinsk, was in Kazakhstan (Russia still had access to Novaya Zemlya near the Arctic Circle). In 1991, Russia declared a unilateral moratorium on testing, followed by the U.S. in 1992. By this time, the U.S. had conducted 1,054 tests and Russia, 715.

Negotiations were often contentious. France and China continued testing, claiming that they had conducted far fewer tests and needed to validate new designs since the CTBT did not imply an end to nuclear deterrence. France and the U.S. even toyed with the idea of a CTBT that would permit testing at a low threshold, below 500 tonnes of TNT equivalent. This was one-thirtieth of the “Little Boy”, the bomb the U.S. dropped on Hiroshima on August 6, 1945 — its explosive yield was estimated to be the equivalent of 15,000 tonnes of TNT. Civil society and the non-nuclear weapon states reacted negatively to such an idea and it was dropped. Some countries proposed that the best way to verify a comprehensive test ban would be to permanently shut down all test sites, an idea that was unwelcome to the nuclear weapon states.

Eventually, the U.S. came up with the idea of defining the “comprehensive test ban” as a “zero yields” test ban that would prohibit supercritical hydro-nuclear tests but not sub-critical hydrodynamic nuclear tests. Once the United Kingdom and France came on board, the U.S. was able to prevail upon Russia and China to accept this understanding. After all, this was the moment of the U.S.’s unipolar supremacy. At home, the Clinton administration in the U.S. satisfied the hawks by announcing a science-based nuclear Stockpile Stewardship and Management Program, a generously funded project to keep the nuclear laboratories in business and the Pentagon happy. Accordingly, the CTBT prohibits all parties from carrying out “any nuclear weapon test explosion or any other nuclear explosion”; these terms are neither defined nor elaborated.

Another controversy arose regarding the entry-into-force provisions (Article 14) of the treaty. After India’s proposals for anchoring the CTBT in a disarmament framework did not find acceptance, in June 1996, India announced its decision to withdraw from the negotiations. Unhappy at this turn, the U.K., China and Pakistan took the lead in revising the entry-into-force provisions. The new provisions listed 44 countries by name whose ratification was necessary for the treaty to enter into force and included India. India protested that this attempt at arm-twisting violated a country’s sovereign right to decide if it wanted to join a treaty but was ignored. The CTBT was adopted by a majority vote and opened for signature.

Of the 44 listed countries, to date only 36 have ratified the treaty.China, Egypt, Iran, Israel and the U.S. have signed but not ratified. China maintains that it will only ratify it after the U.S. does so but the Republican dominated Senate had rejected it in 1999. In addition, North Korea, India and Pakistan are the three who have not signed. All three have also undertaken tests after 1996; India and Pakistan in May 1998 and North Korea six times between 2006 and 2017. The CTBT has therefore not entered into force and lacks legal authority.

Nevertheless, an international organisation to verify the CTBT was established in Vienna with a staff of about 230 persons and an annual budget of $130 million. Ironically, the U.S. is the largest contributor with a share of $17 million. The Comprehensive Nuclear-Test-Ban Treaty Organisation (CTBTO) runs an elaborate verification system built around a network of over 325 seismic, radionuclide, infrasound and hydroacoustic (underwater) monitoring stations. The CTBTO has refrained from backing the U.S.’s allegations.

The key change from the 1990s is that the U.S.’s unipolar moment is over and strategic competition among major powers is back. The U.S. now identifies Russia and China as ‘rivals’. Its Nuclear Posture Review asserts that the U.S. faces new nuclear threats because both Russia and China are increasing their reliance on nuclear weapons. The U.S., therefore, has to expand the role of its nuclear weapons and have a more usable and diversified nuclear arsenal. The Trump administration has embarked on a 30-year modernisation plan with a price tag of $1.2 trillion, which could go up over the years. Readiness levels at the Nevada test site that has been silent since 1992 are being enhanced to permit resumption of testing at six months notice. 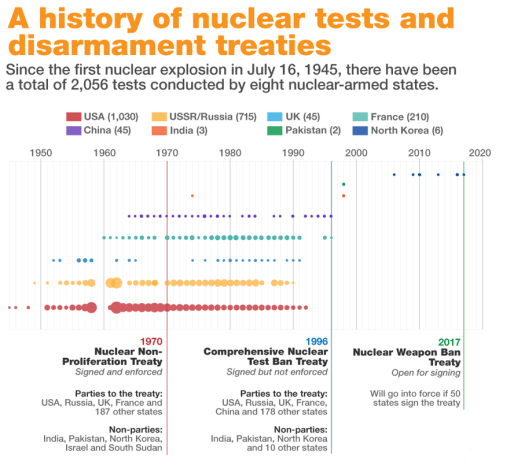 Russia and China have been concerned about the U.S.’s growing technological lead particularly in missile defence and conventional global precision-strike capabilities. Russia has responded by exploring hypersonic delivery systems and theatre systems while China has embarked on a modernisation programme to enhance the survivability of its arsenal which is considerably smaller. In addition, both countries are also investing heavily in offensive cyber capabilities.

The new U.S. report stops short of accusing China for a violation but refers to “a high level of activity at the Lop Nur test site throughout 2019” and concludes that together with its lack of transparency, China provokes concerns about its intent to observe the zero-yield moratorium on testing.

The U.S. claims that Russian experiments have generated nuclear yield but is unable to indicate how many such experiments were conducted in 2019. It suggests that Russia could be testing in a manner that releases nuclear energy from an explosive canister, generating suspicions about its compliance.

The New Strategic Arms Reduction Treaty (New START) limits U.S. and Russian arsenals but will expire in 2021 and U.S. President Donald Trump has already indicated that he does not plan to extend it. Instead, the Trump administration would like to bring China into some kind of nuclear arms control talks, something China has avoided by pointing to the fact that the U.S. and Russia still account for over 90% of global nuclear arsenals.

Both China and Russia have dismissed the U.S.’s allegations, pointing to the Trump administration’s backtracking from other negotiated agreements such as the Iran nuclear deal or the U.S.-Russia Intermediate-Range Nuclear Forces (INF) Treaty. Tensions with China are already high with trade and technology disputes, militarisation in the South China Sea and most recently, with the novel coronavirus pandemic. The U.S. could also be preparing the ground for resuming testing at Nevada.

The Cold War rivalry was already visible when the nuclear arms race began in the 1950s. New rivalries have already emerged. Resumption of nuclear testing may signal the demise of the ill-fated CTBT, marking the beginnings of a new nuclear arms race.