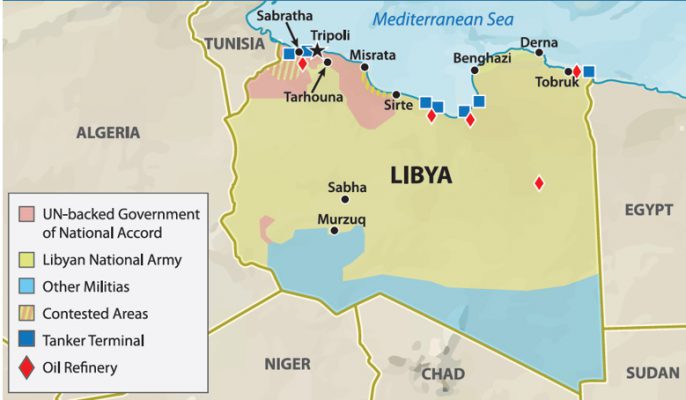 Rival parties in Libya on 23 October 2020 announced a historic ceasefire followed by five days of the 5+5 Libyan Joint Military Commission (JMC) talks in Geneva, giving way to the possibility that the long-drawn conflict might be coming to an end.

Stephanie Williams, who is the Acting Special Representative of the Secretary-General of the UN said, “It is my most fervent hope that today’s agreement will be celebrated by future generations of Libyans as representing that first, crucial, brave step towards a comprehensive settlement of the long Libyan crisis.”

Libya has been embroiled in a tussle for power between rival militias ever since Muammar Gaddafi was ousted from power by NATO-backed forces and was killed by rebel militia in October 2011. Gaddafi’s death marked the end of an eventful 42-year rule by the former Army officer who took over the reins of power from King Idris in a military coup in 1969.

In the wake of Gaddafi’s ouster, dozens of militias led by multiple warlords scrambled to occupy the power vacuum. As a result, Libya turned into a war zone with different militant leaders claiming control of the North African nation. Some of the issues of dispute among the warring factions include control of the oil infrastructure, governance, national finances and the military.

Are other countries involved?

The UN-backed internationally recognised government called the Government of National Accord (GNA) is led by Fayez al-Sarraj, whose Tripoli-based government is supported by allies Qatar and Turkey. Turkey has sent troops to Libya, which includes Syrian rebel fighters who are aligned with Turkey, according to the BBC. Turkey maintains that it has sent these troops to help the UN-backed government in the west. The GNA, whose authority is challenged by the factions controlling the east, took power in 2015 under the UN-brokered Libyan Political Agreement.

The eastern part of Libya is controlled by rebel forces under the Libyan National Army (LNA) that is led by General Khalifa Haftar who are supported by Russian military contractors. Between 2014-2019, the LNA has conducted military operations against the Islamic State in the east. The spread of the Islamic State has further complicated the situation and is also one reason the US is one of the foreign states that has intervened.

What has been the impact of the civil war in Libya?

As per the Council on Foreign Relations’ Global Conflict Tracker, the civil war in Libya has created over 50,000 refugees and asylum seekers, while more than 268,000 people have been displaced. According to a Congressional Research Service (CRS) report, since April 2019, over 2,600 Libyans including hundreds of civilians have been killed.

So what is the new ceasefire agreement about?

As per this new agreement facilitated by the UN, all foreign mercenaries and armed forces will have to withdraw within the next 90 days and the parties also agreed that any violations in the ceasefire will be dealt by a joint military force, which will be under a unified command.

The ceasefire, however, does not apply to UN-designated terrorist groups. The agreement has also established a Joint Police Operations room that will implement and propose special arrangements to secure the areas that are cleared of military units and armed groups. Further, the 5+5 have also agreed to open the land and air routes that connect the regions and cities of Libya.

Significantly, Libya has Africa’s largest oil and gas reserves and with regards to oil production, the different parties have agreed that the commanders of the petroleum facilities from the east and west will work directly with a representative who will be appointed by the National Oil Corporation (NOC). This representative will be tasked with recommending a plan for restructuring the Petroleum Facilities Guards in order to ensure that the flow of oil continues. This is a significant development since control of the oil infrastructure is one the elements of competition between the GNA and LNA.