What is a radio burst, spotted by NASA for the first time in the Milky Way? 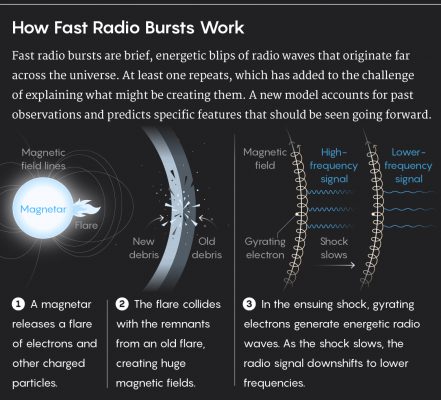 Recently, NASA has reported that it observed a mix of X-ray and radio signals never observed before in the Milky Way. Significantly, the flare-up it observed included the first fast radio burst (FRB) seen within the galaxy.

The first FRB was discovered in 2007. Essentially, FRBs are bright bursts of radio waves (radio waves can be produced by astronomical objects with changing magnetic fields) whose durations lie in the millisecond-scale, because of which it is difficult to detect them and determine their position in the sky.

What is the origin of the FRB detected?

The source of the FRB detected in April 2020 in the Milky Way is a very powerful magnetic neutron star, referred to as a magnetar, called SGR 1935+2154 or SGR 1935, which is located in the constellation Vulpecula and is estimated to be between 14,000-41,000 light-years away.

What is a magnetar?

Until now, there were various theories that tried to explain what the possible sources of an FRB could be. One of the sources proposed by the theories has been magnetars. But before April this year, scientists did not have any evidence to show that FRBs could be blasted out of a magnetar. Therefore, the observation is especially significant.

Prime Minister Narendra Modi will virtually inaugurate the Ghogha-Hazira Ro-Pax ferry service in Gujarat. This will be the second such ferry service to be launched by the PM after the Ghogha-Dahej route three years ago, which is now dysfunctional.

What is different about the Ghogha-Hazira RoPax ferry service?

Announcing the suspension of ferry service on September 24, 2019, Gujarat Maritime Board (GMB) issued a statement that four to six lakh cusecs of water discharged from the Narmada dam had “resulted in heavy and unexpected siltation in the navigation channel at Dahej Ro-Ro terminal. ”The water level at this terminal has decreased to just one metre which was “not safe for ferry operations,”. GMB also invoked the force majeure clause (unforeseeable circumstances that prevent fulfilment of contract).

India ranks third and fifth from the bottom respectively among countries where 19-year-old girls and boys have a low body mass index, according to a study in The Lancet.

What does the study indicate?

The Software Technology Parks of India (STPI) is investing up to ₹400 crore in setting up office and connectivity infrastructure across several cities, offering small technology firms a ‘plug-and-play’ facility.