The study — a “systematic assessment” of mammals in the wildlife corridor formed by the Aravalli hills in Gurgaon and Faridabad with the Asola Wildlife Sanctuary (WLS) in Delhi — has been carried out. It is conducted over two seasons in 2019, the study is “supported” by WWF-India Small Grants Programme and CEDAR.
Findings

1. In comparison to Asola WLS, both Gurgaon and Faridabad Aravallis were found to harbour extremely rich variety of mammals — despite the fact that Asola is a wildlife sanctuary and has more legal protection.
2. This can be attributed to “the attitude of tolerance to wildlife” amongst the local population, “general low density of people”, and “subsistence agricultural practices” prevalent in the two districts.
3. The study indicated that the hotspot of wildlife in this corridor is actually between Damdama and Mangar Bani, and wildlife moves from there to Asola through the Aravalli in Faridabad.
4. This indicates that Asola will survive as long as the Aravalli region of Gurgaon and Faridabad survives. If this finishes, Asola will automatically finish as well. It is, hence, critical to protect this region.
5. The density of leopards and other endangered species, including striped hyena, is approximately double in Gurgaon Aravallis of what it is in Faridabad and Asola.

Threats
1. Highways, especially the Gurgaon-Faridabad Expressway, and increasing construction are a “major threat” to the wildlife corridor. This expressway poses a major barrier to movement of wildlife between the Aravallis of Delhi and Haryana.
2. Land use change and protect the wildlife corridor and habitat from further fragmentation, construction and deforestation are other threats.

What needs to be done
1. Construction of expressways and highways, and planning, also needs to take into account wildlife in the city, such as by constructing underpasses or flyovers that allow at least a portion of the wildlife to cross from one part to the other and prevent complete fragmentation of wildlife populations between Aravallis of Delhi and Haryana.
2. Community-based conservation must be looked at — it is the low carbon lifestyle of the local people that is helping to conserve the area.
3. The government needs to understand that even if protecting this section of the Aravalli, most species will be able to regenerate.

Recently, a meeting was called to discuss “plans for bridging the learning gap caused due to school lockdown as well as review of online and offline instructions, examinations and plans for reopening schools”.
Findings

1. During this meeting, it was reported by Assam, UP and J&K representatives to the Parliamentary Standing Committee on education headed by Vinay Sahasrabuddhe that schools continue to report low attendance after reopening.
a. Assam: Schools recorded around 50% attendance
b. Uttar Pradesh: 40%
c. Jammu and Kashmir too reported low attendance during the interaction2.It leads to learning loss that may have taken place due to the long absence of students from classrooms.
2. Pupils missing out on almost half the year of schooling last year and then a patchwork of inequalities of missed schooling this term will impact on children’s education.
a. There’ll be a widening of existing inequalities – particularly as it’s tended to be quite disadvantaged council areas where pupils have missed out on most schooling.
b. Though most absence during the term was due to disruption as a result of positive Covid cases, some families have been anxious about children going to school.
Digital initiatives taken to continue learning during classroom lockdown and innovative measures adopted by different states to help students who lack access to online classes.

30th National Energy Conservation Awards
Ministry of Power, in association with Bureau of Energy Efficiency (BEE), organised the 30th National Energy Conservation Awards (NECA) function as a Hybrid event due to the COVID pandemic.
During the event, the Standards and Labelling Programme for Air Compressors and Ultra High Definition (UHD) TV on voluntary basis was initiated; SAATHEE (State-wise Actions on Annual Targets and Headways on Energy Efficiency) – A portal for State Designated Agency for state level activities was also launched.

During the award ceremony, it was specifically mentioned that the impact of PAT Cycle II achieved emission reduction of 61 million ton of CO2.
1. The event included a virtual exhibition on achievements on Energy Efficiency. The awards were presented to the winners from different industries and sector establishments.
2. Energy Efficiency is not only good for the world but also for companies and industries themselves.
3. Despite this the country has made ambitious commitments to meet the global challenge posed by climate change. Our country has target to reduce the emission intensity to 33-35% by 2030 compared to 2005 level, as part of commitments made during COP 21.
NATIONAL ENERGY CONSERVATION AWARDS PROGRAMME:
1. It was launched by the Ministry of Power in 1991, to provide national recognition to those industries and establishments which have taken special efforts to reduce energy consumption while maintaining their production.
2. The awards were given away for the first time on 14th December, 1991, which was declared as the ‘The National Energy Conservation Day‘. It recognizes the energy efficiency achievements in 56 sub-sectors across industry, establishments and institutions.
Standards and Labelling Programme for Air Compressors and UHD TV
1. Aim: To enhance the level of energy conservation, this can then be used for a different purpose in the home or workplace. Besides saving energy, this programme could also facilitate reducing energy bills.
2. It is to be carried out on a voluntary basis.
SAATHEE PORTAL:
1. BEE has developed a Management Information System (MIS) portal called SAATHEE for the State Designated Agency (SDA) for state level activities.
2. Useful in capturing the physical and financial status/ progress of Energy Efficiency activities being implemented by States/ UTs across the country. Thus, it will facilitate Real Time Monitoring.
3. Help in decision making, coordination, control, analysis, and implementation and enforcement of the compliance process for various energy consumers at the pan India level.

US House plans vote demanding Pence seize Trump’s powers
In the immediate aftermath of Donald Trump supporters storming the US Capitol building, which houses both the US Senate as well as the House of Representatives, Democrats in the House of Republicans introduced an article of impeachment against U.S. President. 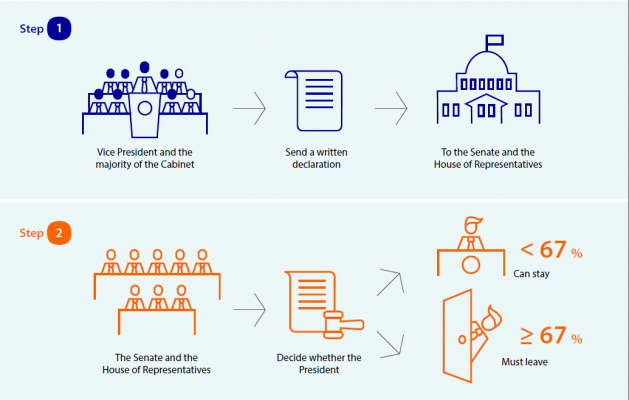 New Foreign Trade Policy to come into effect from April 1